If one happens to walk along Kinmen’s streets or live in a Minnan-style hostel, he or she might be startled by a flock of migratory birds or woken up in the early morning by the visit of the twitting birds.

Or if one goes to a food stall, he or she might find that oyster omelets and oyster vermicelli are one of the popular treats in Kinmen.  And don’t be surprised when a plate or bowl brimming with oysters is served onto the table as most generous stall owners believe it is the way to treat guests.

Indeed, the rich resources have made Kinmen an appealing place for the nature lovers to visit as people in this former military fortress somehow know how to finds a gentle balance between life and nature.

Oyster picking with the locals

Oyster omelets and oyster vermicelli — one of the popular food selections in Taiwan — are frequently named by foreign media outlets or bloggers as the top must-eat food items for visitors. For Kinmenese, oysters are the prime source of protein in their diets.

To ensure a smooth tour to the oyster field, one should first check the tidal schedule, wake up early and head to the northwest corner of Kinmen called Guningtou (古寧頭). While Guningtou has been known as the site of the 1949 “Battle of Guningtou” (古寧頭戰役) — a battle regarded by historians as a critical turning point of the bitter war between Chinese Communists and the Nationalists, it has also been seen as a “vital area” for the local oyster farmers.

There’s a sight to behold: a vast muddy land of granite stone slabs sticking out of the murky intertidal mudflat. Some slabs look whiter than the others; the ones that are darker from a distance are actually oyster-covered slabs.

Guningtou’s oyster fields have been around for over 400 years since the Ming Dynasty (1368-1644) when the granite slabs were imported from mainland China to Kinmen for oyster farming. Since then, the oyster farming land became a generational industry, passed on from generation to generation. No one else except for the owner can cultivate the oysters on that particular piece of land. 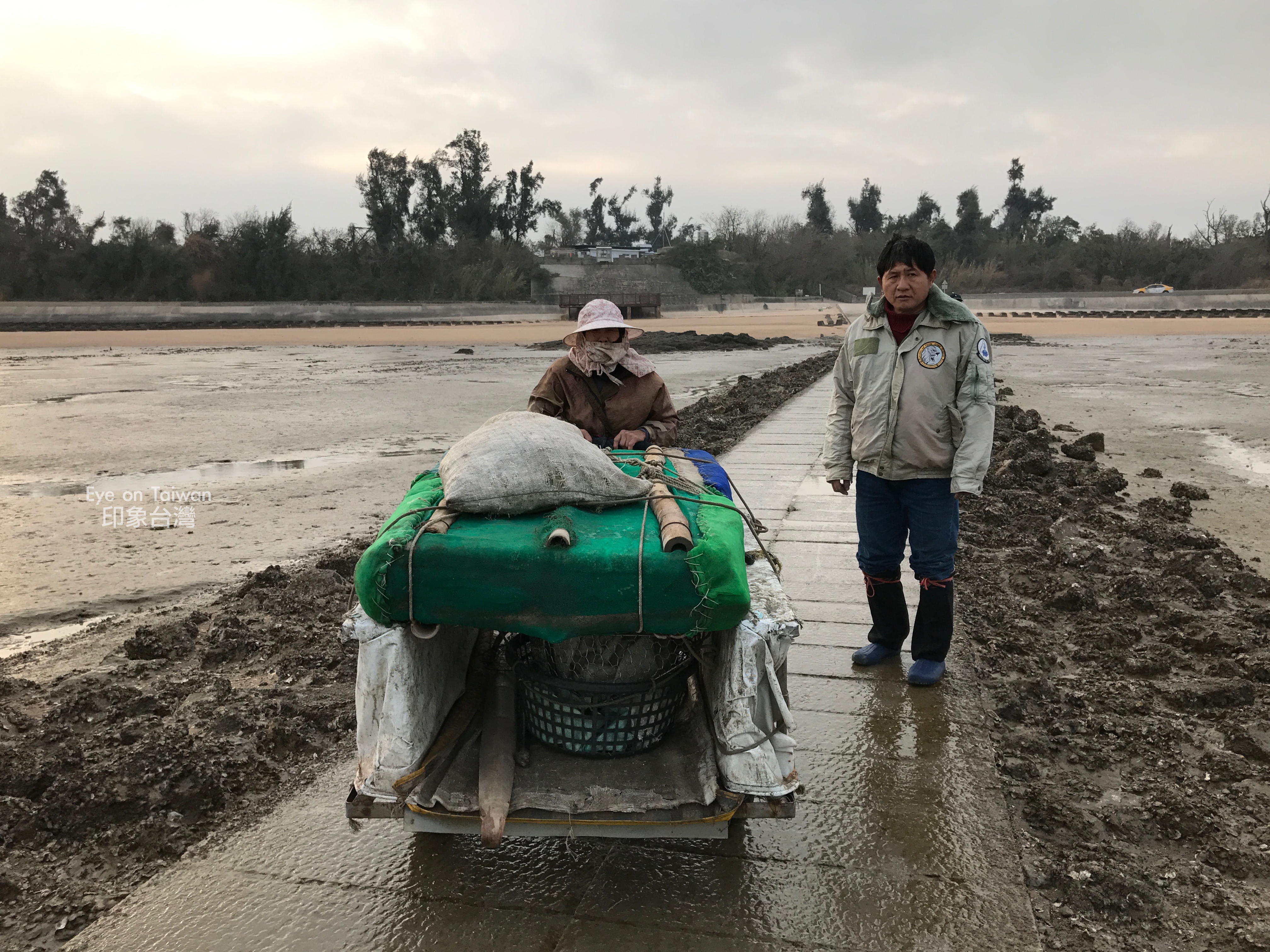 What’s interesting to observe is how none of the farmers require signs to know which plot of land belongs to whom. They know it by heart, just like how they’re in tune with the natural environment around them.

The oysters in Guningtou are unique not only in its size, but also in its sweet flavor, tangy but firm texture, and how they are grown and harvested. Guningtou’s oysters are exposed and then dunked in the ocean waters as tidal schedules change each day, giving them time to consume nutrients from the sea and become exposed to the elements.

They are affectionally named “stone oysters” (石蚵) due to the method of farming. On the morning of our visit, an elderly man in his late 80s was just heading to his oyster field. The locals say he is on time every morning, regardless of rain or shine.

One wouldn’t be able to guess the oyster farmers’ ages, though, they’re agiler and fit you’re led to believe. They can effortlessly carry a basket full of oysters and wash them in the water.

Tourists who are comfortable getting their feet and hands dirty are welcome to partake in oyster harvesting activities. After harvesting one’s own oysters, there are additional activities to cook them as well.

Oyster harvesting is strenuous work. Chen Kai-cheng, director of Guningtou’s Community Association said due to the trend of migration of the locals to Taiwan proper and an aging population, the oyster harvest is declining. At the height of Kinmen’s oyster industry, the muddy fields would be filled with farmers from the entire families of labor-ready individuals.

There were only a handful of senior farmers on the day we visited, ankle-deep in the mud, chipping away the oysters from the granite slabs in the early morning and braving the chilly winds. The younger generation is less keen to toil away in such harsh environments.

Chen said to maintain its sustainability due to the aging population, he hopes Kinmen’s oyster farming can also become part of the tourist attractions in addition to its economic value, especially when such a farming contains folk culture and historical values.

If time permits one can visit the “Rock Oyster Culture Museum” (石蚵文化館) for a more comprehensive understanding of the unique culture. There, the tools, species, “oyster-harvest certification” issued for the local oyster farmers, and more details about the oyster history in Kinmen are all on display.

Near the museum is a small restaurant offering variations of oyster-themed delicacies, ranging from the deep-fried batter with vegetables and oysters as fillings, to oyster omelets and oyster vermicelli.

Except for passionate birdwatchers, most people don’t know this fact about Kinmen: the offshore island boasts the most abundant bird species in all of Taiwan, at approximately 300 exotic species. It also has the highest density of birds, too.

It’s not hard to imagine though. When staying at Zhushan Village’s Minnan-style hostel, we were woken up by the chirping of birds in the early morning hours.

Ci Lake (慈湖), located on Kinmen’s west side, is a popular birdwatching site to walk or bike. In the winter, great cormorant’s are the prime migratory birds to look for. They often nest in colonies, so it’s quite common to see them overtaking tall trees and seeing them take off in a huge flurry of blackness into the sky.

Our tour guide said popular photos of the great cormorants included the great birds gliding over Ci Lake with the sunset in the background. Though, after Typhoon Meranti swept through Kinmen last year, taking photos of the tall trees in the wild and near Ci Lake as well as the migratory birds resting atop a tree on the roadside in the moonlight has been considered a new and appealing photogenic angle.

Also, otters are common in Kinmen as well. Signs warning drivers to be wary of otters crossing the streets can be found around the islet. If one’s lucky, they may even find them in the wild. We crossed a small bridge as we trekked around Ci Lake, but only found otter footprints in the mud beside a stream.

For a unique spin to your trip, consider stopping by the “Triangle Fortress,” (三角堡) which is located near the sea beside Ci Lake.

Tanks that were used during Kinmen’s military era are lined up near the shore, while visitors are able to cross a bridge over a moat-like design, intended for protection, into the Triangle Fortress.

While it is no longer in use, tourists can peer through lookout windows or holes and maybe imagine how the soldiers of the past felt, standing in the same spot, watching out for any sign of military attack by the Communist forces from across the sea. 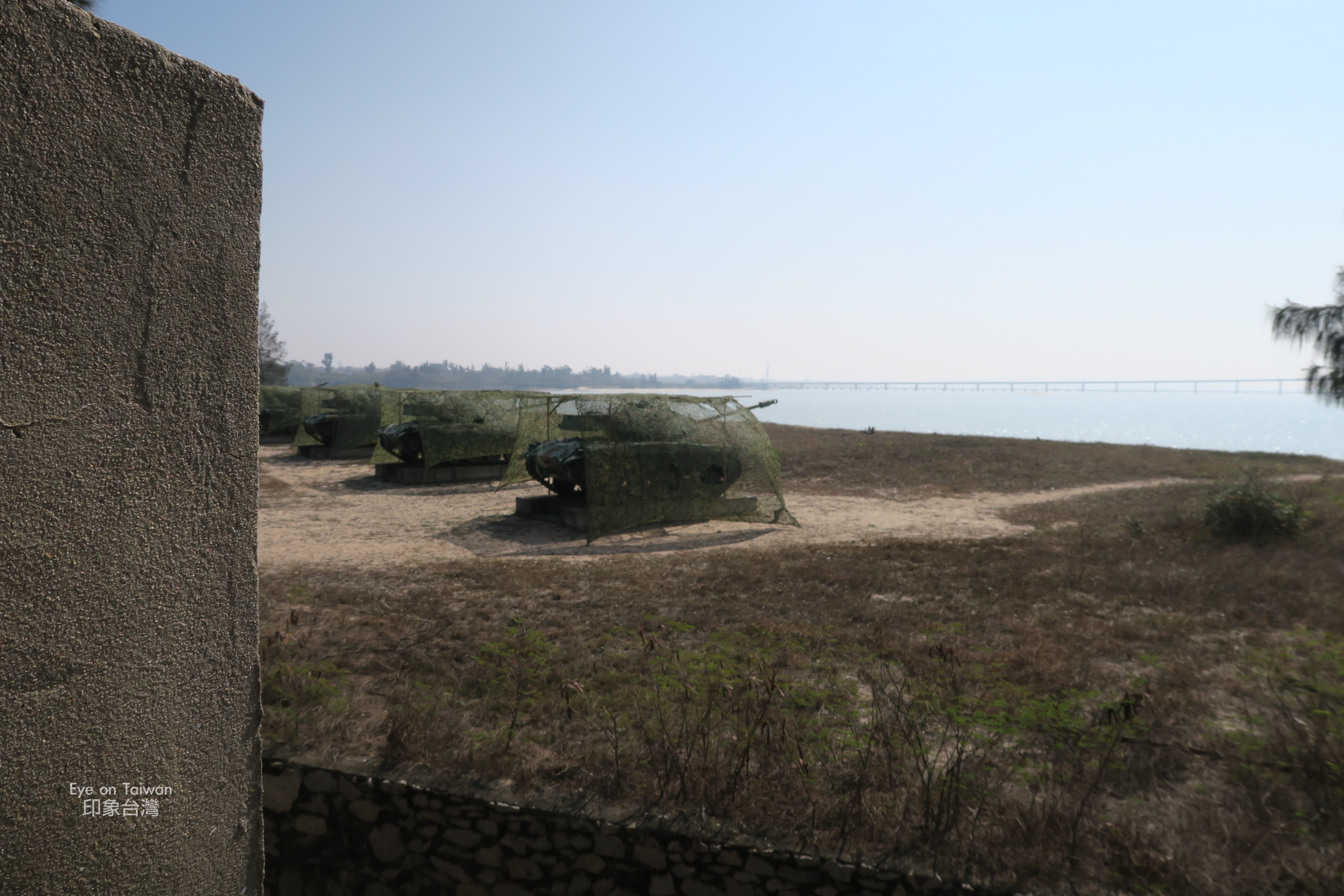