Kinmen County, the former military fortress of Taiwan and a tiny islet just on the doorsteps of China’s Xiamen, has long known for its battlefield culture and military presence due to its historical role of bitter fighting between the Chinese Communists and the Nationalist forces shortly after the latter withdrew from the mainland in 1949.
Hardly anyone would associate it with a land of aesthetic appeal, rich in ancient Minnan or southern-Fujian-style culture and historical attractions.

Kinmen County, the former military fortress of Taiwan and a tiny islet just on the doorsteps of China’s Xiamen, has long known for its battlefield culture and military presence due to its historical role of bitter fighting between the Chinese Communists and the Nationalist forces shortly after the latter withdrew from the mainland in 1949.

Hardly anyone would associate it with a land of aesthetic appeal, rich in ancient Minnan or southern-Fujian-style culture and historical attractions. 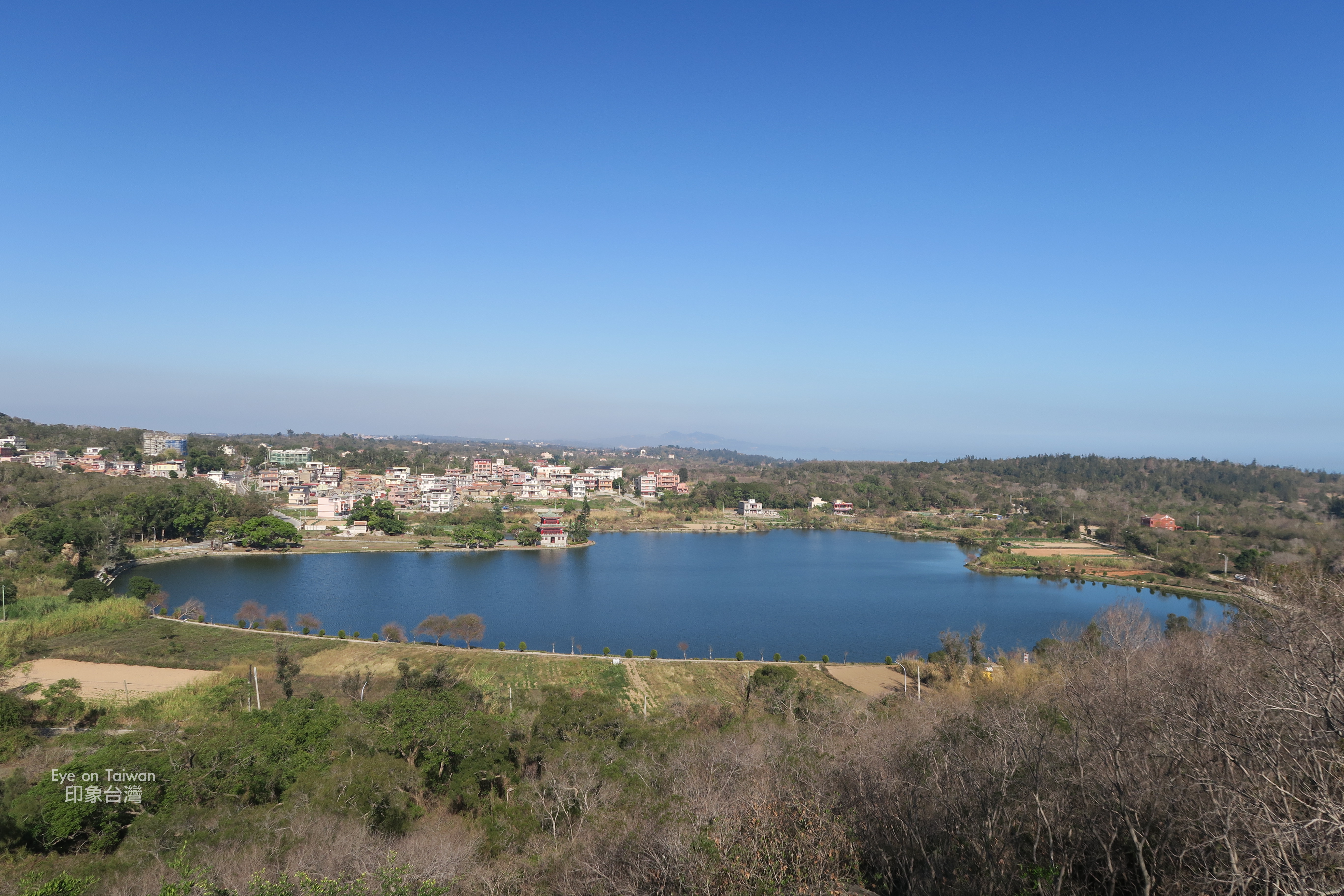 A stroll around Gugang Lake

Located in Jincheng Township are two popular attractions — Zhaishan Tunnel (翟山坑道) and Gugang Lake (古崗湖), whose historical values dating back to over 350 years ago are more than meets the eye.

The “Han Ying Yun Geng Inscription” (漢影雲根碣) site is a typical example. The inscription is found in Xiantai Mountain (獻台山), a third-grade national historical site. It was carved by Ming Dynasty’s King Lu (魯王 1644-1622), who retreated to Kinmen after the Manchu conquest of China and established the Qing Dynasty.

While there are different interpretations of what the inscription means, local historian Tung Sen-bao (董森堡) gave the most popular account about it: “On this rock where the sun shines upon, with clouds floating in the blue sky and the surrounding mountains bearing down, this reminds me of home. Like a rootless cloud, I’ve come to this land called Kinmen.”

“Han Ying Yun Geng Inscription” is, in reality, a remake of the original inscription on a huge rock, which collapsed and crumbled into the present form left with only three words: “Han Ying Yun.” The broken rock with the word “Geng” was later used by soldiers as part of the construction materials to build a school.

Though the crumbled rock is not as well-shaped as that of the remake, its historical appeal still arrests the eyes or minds of many visitors.

King Lu (Zhu Zhoujung) was not the only celebrity who found solace there. Zheng Chenggong’s (鄭成功) father-in-law Tung Yangxian (董颺先 1591-1656) also left something for remembrance. He wrote Chinese poems inscribed on a great number of rocks and stones on the Guanzhi Historical Trail. Like the late king, he fled to Kinmen and spent the rest of his time until he died. Most of his poems portray his homesickness, and desire to return to China and to revive the Ming Dynasty.

Somewhere on the historical trail, beside a towering rock engraved with a poem, is a small shelter which Tung Sen-bao said could be the place where Zheng’s father-in-law went for mediation.

Standing or sitting there as Tung had done in the ancient time, one might understand why he chose that spot as it has a magnificent view overlooking the Gugang Lake and the entire Gugang Village built after his time.

Many of the inscribed stones or rocks were discovered with efforts or by accident over the years. Tung, the historian, suggested that there could be many more of Tung Yangxian’s poems hidden in the forest and vegetation, waiting to be uncovered.

Much effort was carried out to ensure the carved poems would become readable to the public, including careful repainting by professionals of the inscriptions.

Without adequate learning or explanation by tour guides, one might have the faintest ideas of what those inscriptions mean if they come across them. 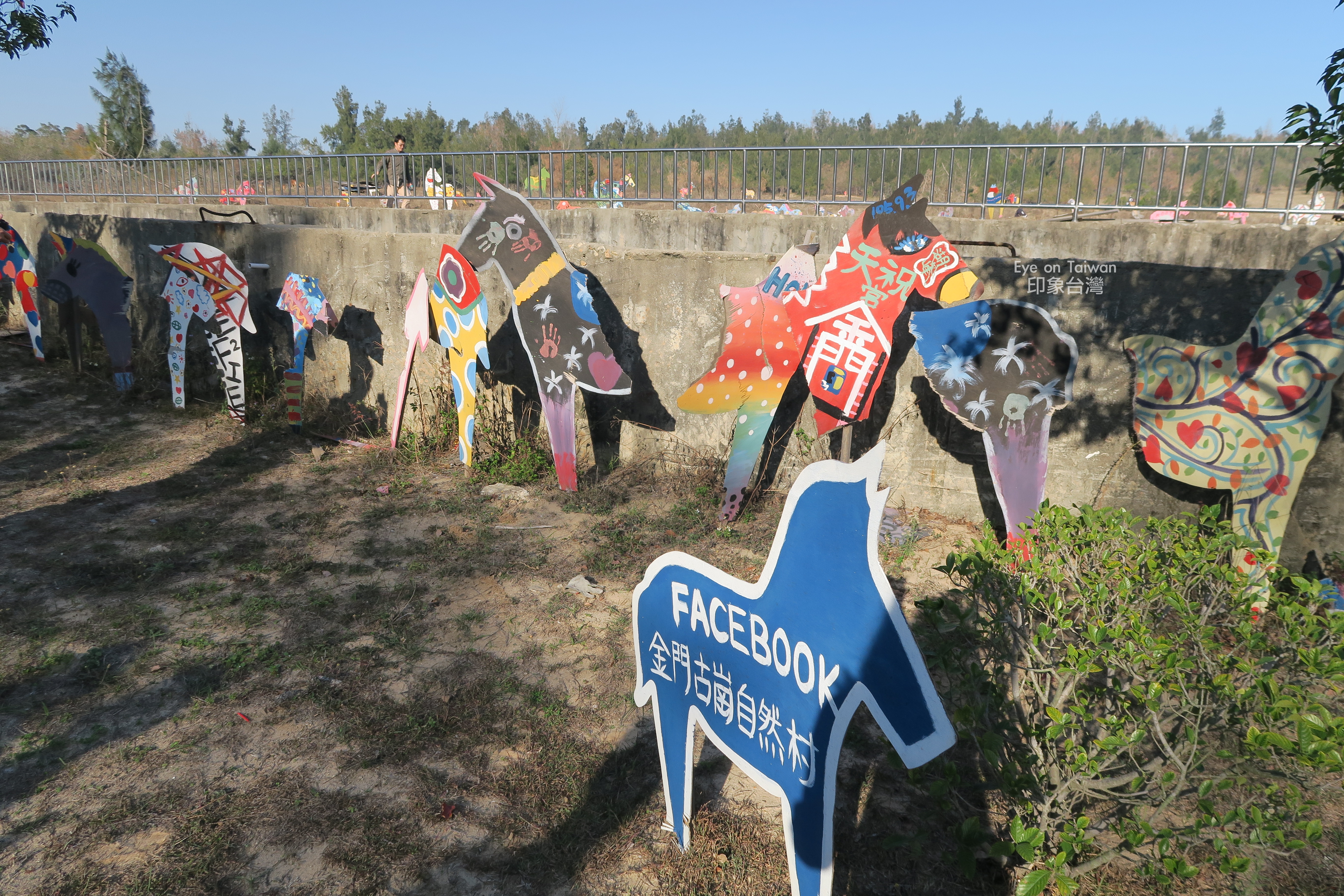 Further down the trial in Gugang is something more children-friendly — colored horses that dot along a field. They’re not real; they’re made from wood and painted by locals. The area used to be a shooting practice field for the new recruits but was later abandoned.

Asked why they are wooden horses instead of wooden cattle since Kinmen’s cattle are famous for its texture and taste, Tung said in the early ninth century, an official supervisor for horse herding Chen Yuan  (陳淵) led people to Wuchou (now known as Kinmen) to cultivate the land. Horses had been the main medium to plow the fields at that time. So it is some sort of a tribute to the ancestors who cultivate the land with horses.

The colorful horses have become a popular check-in place on social media. However, many of the wooden horses were damaged after Typhoon Meranti swept through the island last year. 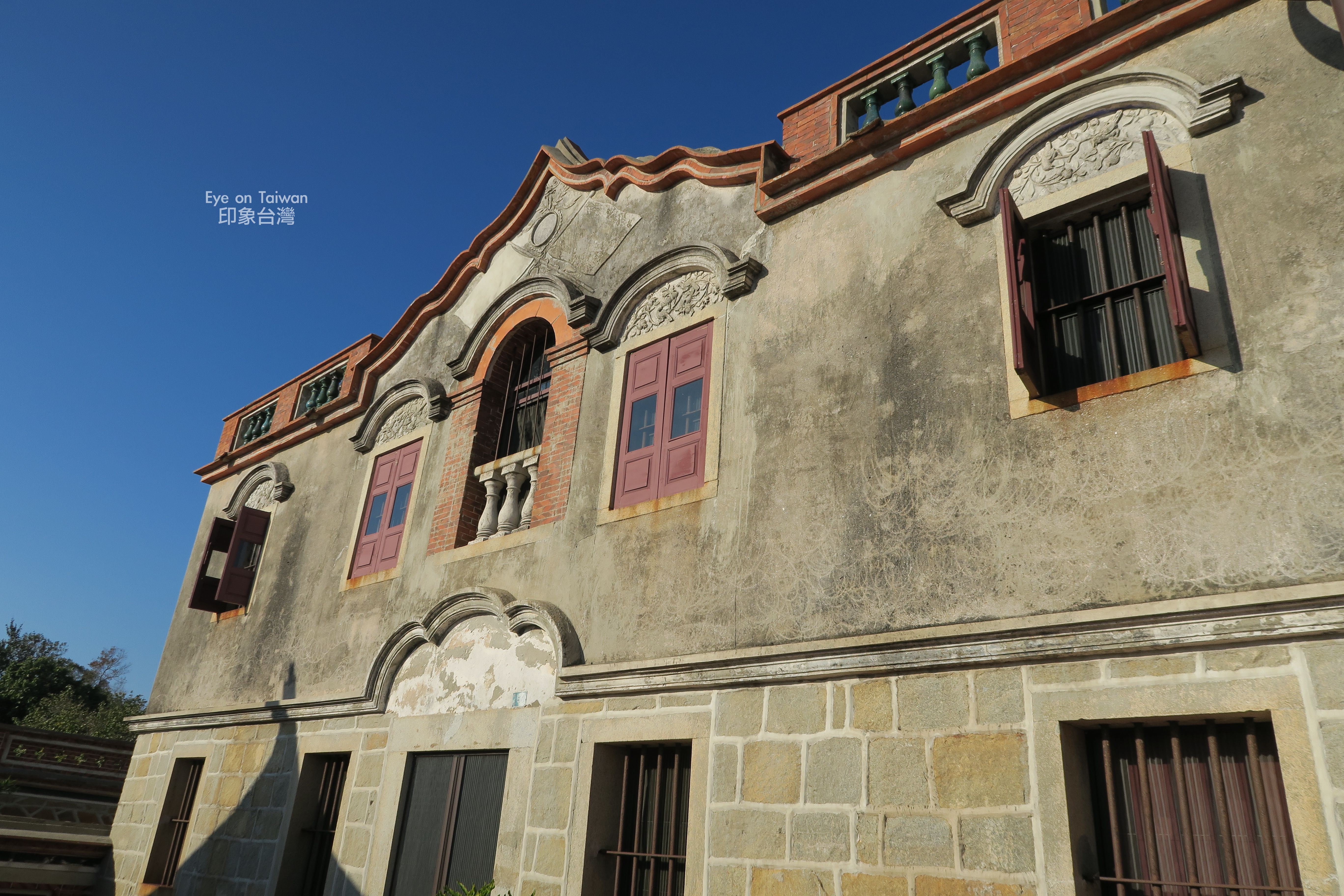 Wealthy Kinmenese emigrants to Southeast Asia often returned to their homeland to build such western-style buildings partly to show their wealth and feedback to their hometown and partly to pass them to their descendants. Those buildings often infused western style designs with the local Minnan style.

The owner of the building, Ouyang Zi-yong (歐陽自永) said an ancestor of his clan earned money in Southeast Asia and returned to his hometown to build what would become Kinmen’s “earliest and first” western-style house.

Compared to other western-style houses in Kinmen, it’s more fortified due to frequent pirate harassment in the area. As a result, the ancestor moved the “five-foot way” walkways from the front to the back of the building.

Travelers to Oucuo can enjoy their offering of an assortment of tea, biscuits and “owl-themed accessories,” styled because of the shopowner’s favorite pet bird. If one visits on a clear day, the sunset there is especially warm and beautiful, basking Oucuo’s warm-colored palate in its yellow glow. 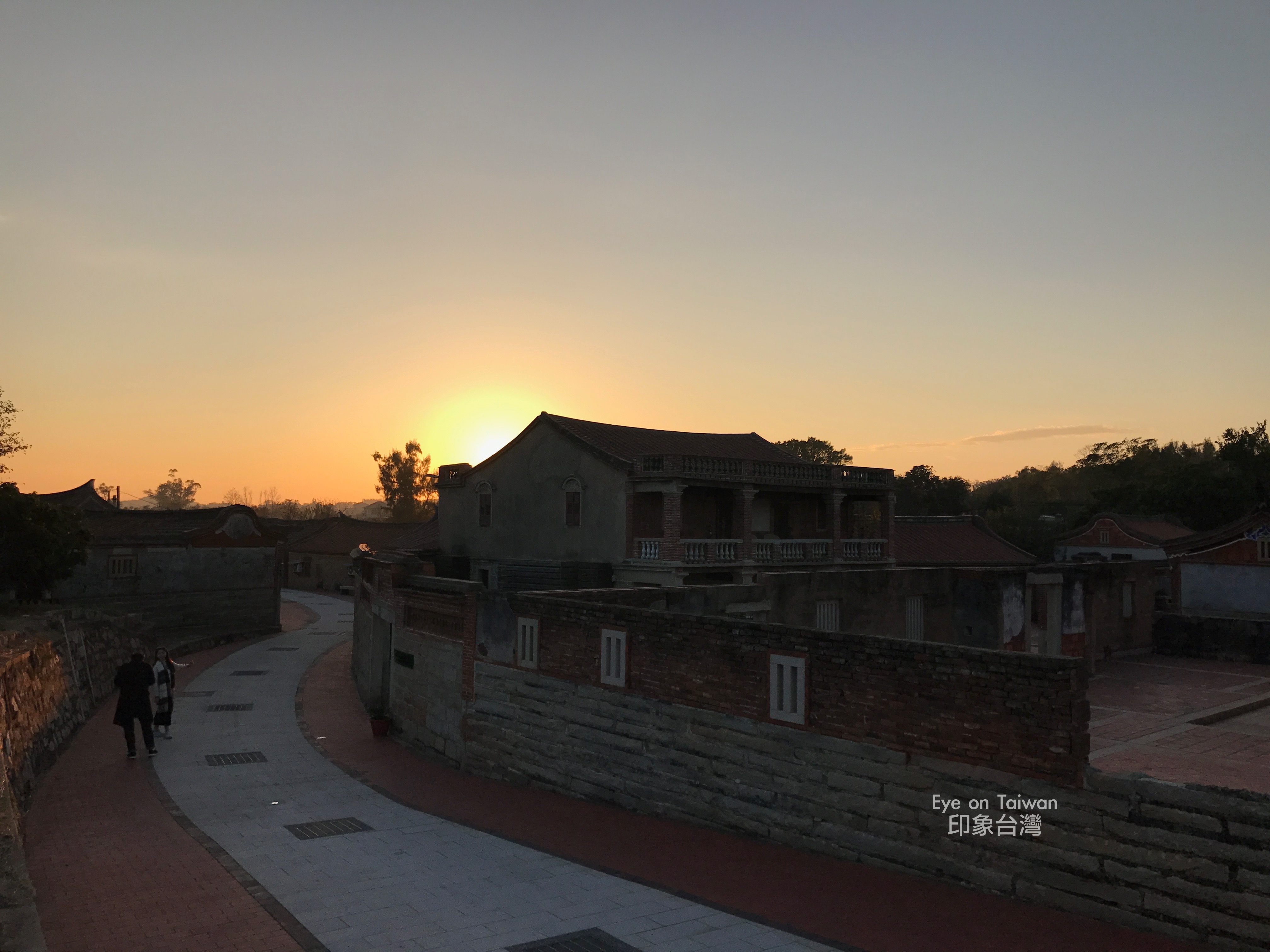 A tight-knit community transformed Bishan Village (碧山聚落) into one of the colorful and playful villages on the eastern part of Kinmen.

Under the instructions of Bishan’s grandmoms, tourists are able to make their own “Ang ku kuei,” a traditional Minnan (and Hakka) snack made of glutinous rice. Here at Bishan, they used peanut powder mixed with sugar as filling. The yellow snacks are usually used as offerings for worship and festivals.

For those who are interested, they also offer coffee DIY activities, where one can roast and package his or her own coffee beans.

While Kinmen doesn’t grow coffee (at least in abundance), coffee was a symbol of wealth as Kinmenese emigrants from Southeast Asia would bring back coffee beans to share with their families.

Aside from DIY activities, take a tour of Bishan Village, and one will encounter some colorful paintings at Minnan-style buildings, a vibrant mixture of the old and modern.
Two notable buildings are located in this quaint community as well — Rui You School (睿友學校) and Chen Qingji Western Style House (陳清吉洋樓).

Both are examples of Kinmense who managed to accumulate wealth overseas and offer feedback to their hometowns. Chen Ruiyou used his own funds and had a relative build the school to further education for the next generation back home, thus creating a western-style building situated in a community of Minnan-style houses.

The Chen Qingji Western Style House, built by the owner’s namesake, a Kinmenese merchant who found fortune in Singapore, became an iconic spot to visit as it was a filming location in “Paradise in Service,” a Taiwanese film set in Kinmen in the 1960s and 1970 and focused on a military brothel.

Do as what the locals do. With that in mind, one should consider staying at a traditional Minnan-style house. More and more tourists are choosing to stay in refurnished Minnan style hostels, which are usually government-certified. 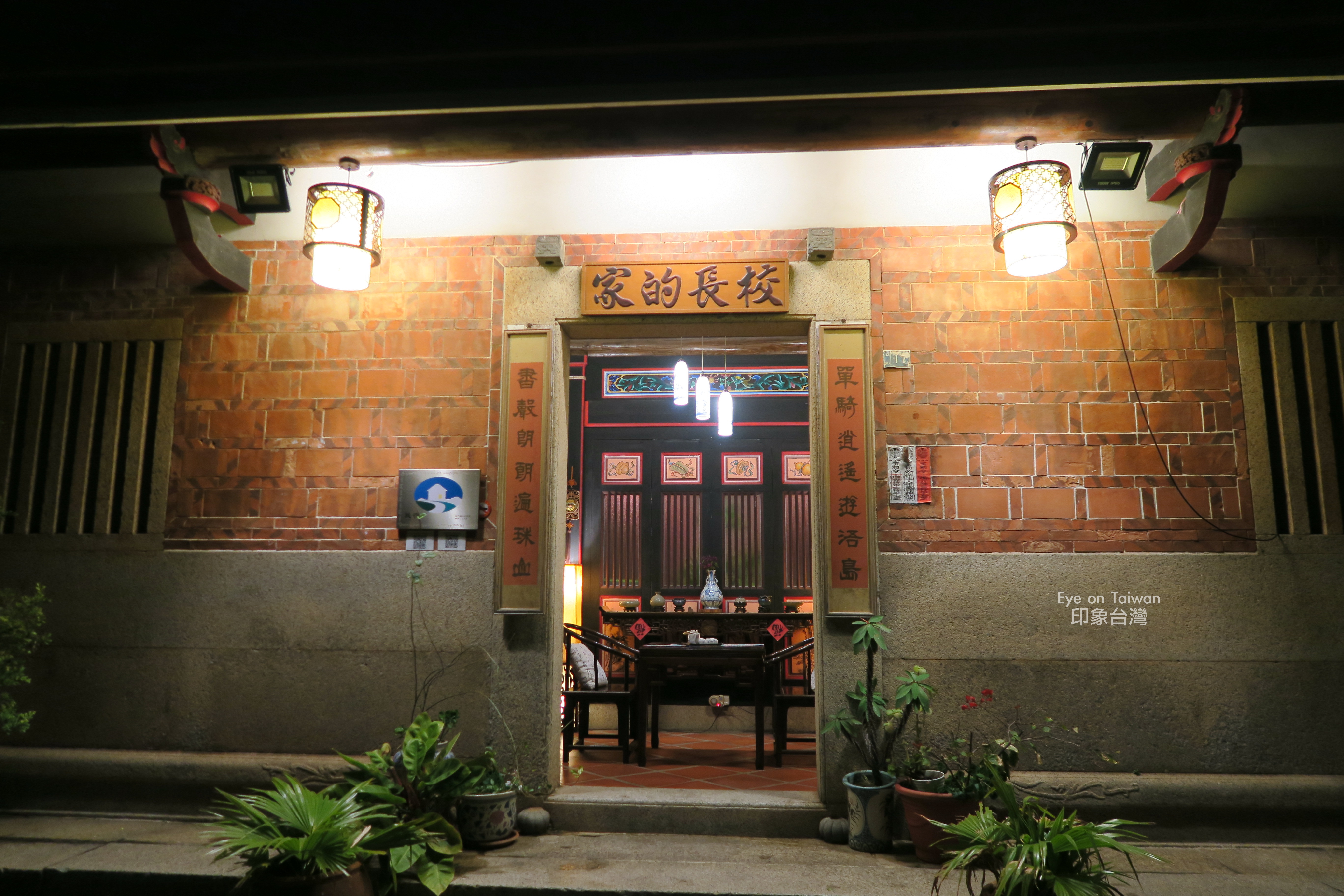 Zhushan Village’s (珠山聚落) quaint Minnan style hostels are such selections to choose from: “Principal’s Home” (校長的家), for example, which used to serve as a school for local children (hence it’s named.)

The hostel is low-key flamboyant in its usage of Chinese-style decor, which can be picturesque for social media. Probably because of its age, doors, and floors can be rickety and sound from neighboring rooms could be heard in the still night.

As Kinmen has to ship its trash and recyclables to Kaohsiung, environment-friendly efforts are highly welcomed, especially in hostels such as the “Principal’s Home,” where in support of green-friendly choices, they don’t offer items such as toothbrushes and toothpaste, and they only change linens after check-out.

Those who wish to stay in Kinmen’s hostels should remember to bring their own toothbrushes and paste.

A stroll around Zhushan Village in the early morning hours is also enlightening, where one can get a glimpse into other Minnan style hostels or local houses.

For history or architecture lovers, these are great places to visit. If you have a good command of Mandarin Chinese (or sometimes, Taiwanese Hokkien), consider making appointments with local tour guides for a deeper understanding of Kinmen’s unique and most comprehensive Minnan culture. While there are English-language explanations for tourist attractions’ introduction signs at most of the sites, most local tour guides can hardly speak English.

As a first-time visitor to Kinmen, going to these places is an enlightening experience. In my observation, I’ve also found and heard that local tour guides are extremely encouraged to use stories to introduce the local culture to tourists. If you love stories, that’s a huge bonus. I know I’m not the only one who can space out during dull, by-the-book tours.

Some people may find their impressions of Taiwan’s outlying islands restricted. For Kinmen, what they traditionally offer are battlefield culture, Kaoliang Spirits (or sorghum) and oysters, but take a walk into the island’s alleys and communities, you’ll be sure to find something charming to appreciate.

Gugang Natural Village (Facebook Page) – Mandarin Chinese is currently the only available language for tour guides. Those interested to visit can make appointments via their Facebook page.

Kinmen, a sensory paradise for the tastebuds and the eye