The Eye on Taiwan reporter sat down with Shanghai Pavilion’s Head Chef Lai Jhung-shun (賴忠舜) for an interview over what they would offer for this year’s Chinese New Year Holiday.

A Taste of Shanghai

Lai, who prides himself on being the head chef of Shanghai Pavilion — known as Taipei’s best Shanghainese cuisine restaurant — said the people in the Chinese city spend weeks preparing for the Chinese New Year Holiday and there is no exception in food. “Food is abundant and full of variety in Shanghai during the holiday,” he said.

Shanghainese cuisine is heavy in its flavoring — it’s salty, sweet and oily. “It’s the standard for Shanghainese foods,” Lai said. But, by today’s standards, the cuisine’s benchmark flavor can be a tad too much for the modern palate, he said.

Lai described that to meet the modern taste, as well as the rising health-conscious awareness among the younger generation, they tweaked their Shanghainese cuisine offerings in this year’s Chinese New Year take-out meals.

It may sound like they’re watering down the flavoring, but the culinary team is creative in this aspect. Their extremely well-known “Monk Jumps over the Wall” dish, a must-have delicacy on the table that contains fish maw, scallops, abalone, chicken and pork tendon, can serve as an example of going “healthy,” Lai said.

Traditional impressions of the dish include the soup being thick and creamy, due to the melted taro in the mix. While delicious and abundant in exquisite ingredients, the heavy flavor can get tiresome on the taste buds and stomach.

Lai said their “Monk Jumps over the Wall” offers a clearer, smoother texture by ruling out taro and concentrating on its broth. They also gathered the ingredients into the broth to cook, fully mixing the seafood flavors with the stock for a rich, savory experience.

Their “Monk Jumps over the Wall” comes with a customized pot, practical exothermic bag, and wrapping fabric, according to the hotel’s press release.

A flash of creativity

Going healthy isn’t the only thing they have in mind this year. Lai said they’ve rolled out a Western and Eastern fusion dish as well, with their “Braised Oxtail with garlic and barbecue sauce” dish. 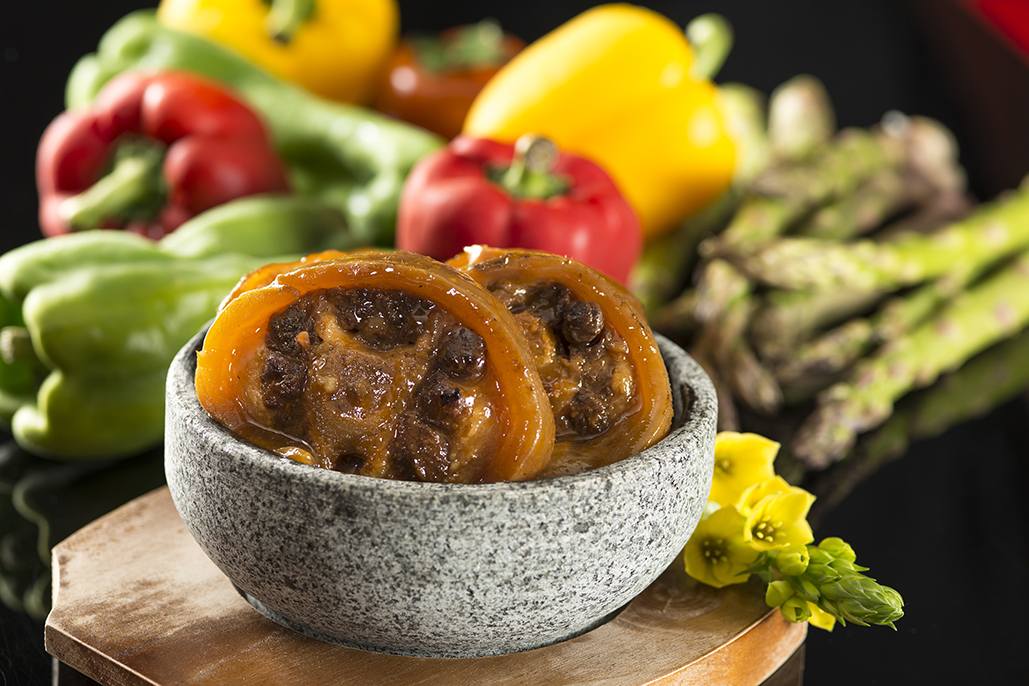 In traditional Cantonese or Shanghainese cuisine, the usage of oxtail is rarely seen, Lai explained. The time-consuming aspect of preparing it could be a major factor in its rarity.

“Sometimes the tail won’t soften even after hours of cooking and stewing,” Lai said, adding that careful chopping off the tail (“you have to slice the joints or it won’t separate”) adds up to the challenge.

When asked why he had pushed himself to roll out such a time-consuming and challenging dish, Lai cited its nutritious value as a major factor. Back in his days as an apprentice, he learned that oxtails were considered a nutritious food due to its collagen and therefore good for human bones.

Despite its scarcity in Cantonese cuisine, Lai said the oxtail dish was a major hit among the diners.

A mixture of the old and new

There’s a sense of nostalgia, however, when chatting about the evolution of Shanghainese cuisine in Taiwan. Lai, with decades of experience under his belt, reminisced about Shanghainese and Cantonese cuisine’s heyday decades ago under Chiang Kai-shek’s rule, where restaurants offering the flavors and dishes blossomed and ruled.

“It makes me sentimental,” Lai said when asked how he felt about seeing Shanghainese cuisine’s decline from its heyday.

In all, seeing empty dishes on the table and satisfied diners is what Lai and his team strive for a well-done meal during the Chinese New Year holiday.

Their set menu, which does not include the “Monk Jumps over the Wall,” is priced at NT$12,888 for six persons. Buyers can receive a complimentary bottle of selected wine.  The last day of order is set on Feb. 12 and pick-up date is scheduled somewhere around Feb 15.