For resident foodies or tourists looking for a bite of something new or something interesting, hip, trendy, creative choices continue to pop up in locations around Taiwan. Here, we’ve compiled several locations in Taipei along the blue line of the Taipei Mass Rapid Transit (Taipei Metro). 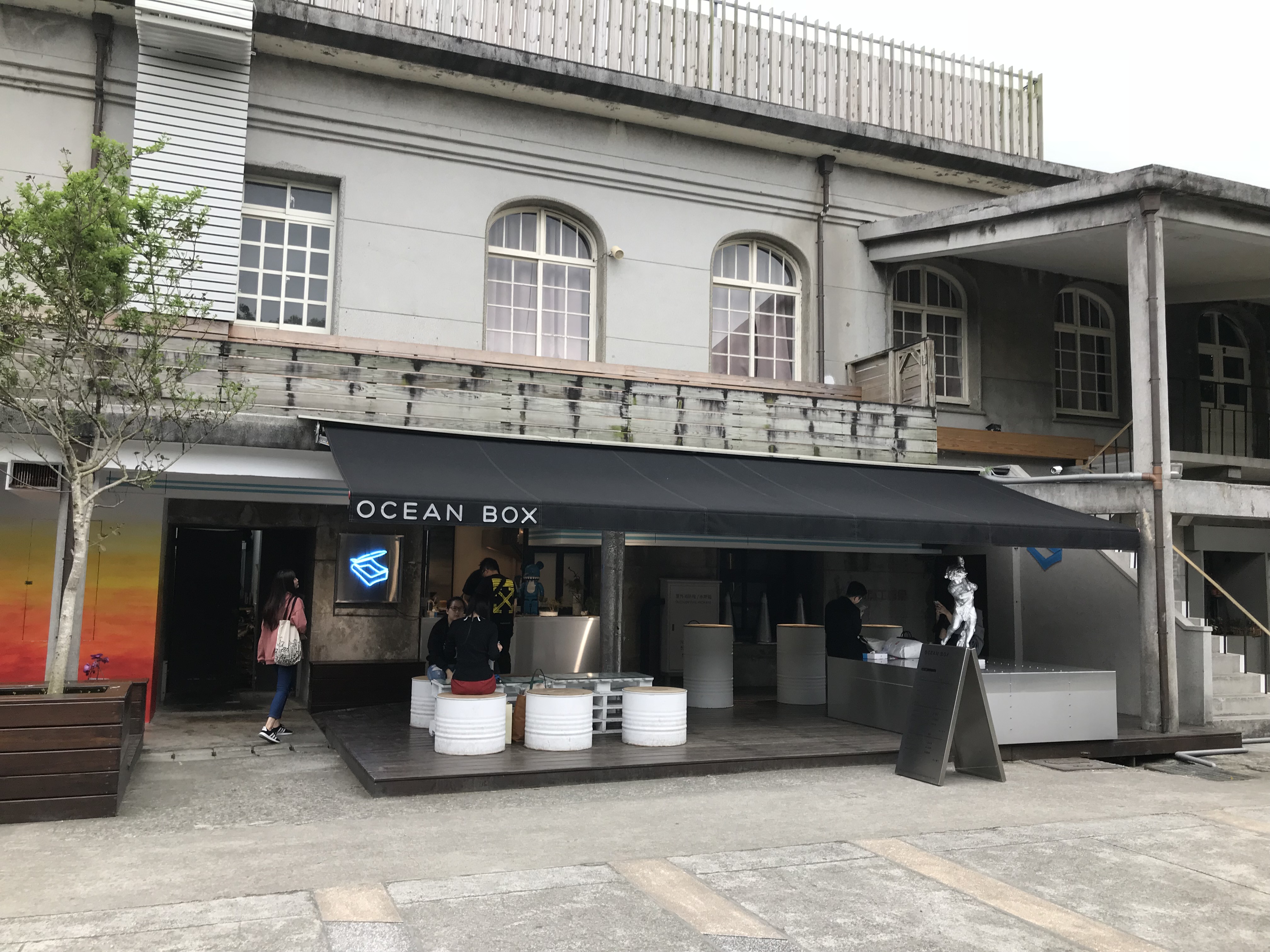 For resident foodies or tourists looking for a bite of something new or something interesting, hip, trendy, creative choices continue to pop up in locations around Taiwan.

This pop-up store is nestled in Huashan Creative Park (華山文創園區), where visitors can order and sit on the white-painted oil barrel seats under the sky and enjoy a trendy, hip dining experience of eating fried fish.

The general decor is designed for a relaxed dining experience as if the diner was transported to the beach and enjoying the oceanic view through the tastebuds and decked out in a minimalistic-experimental laboratory style.

Entrees include fried fish, seasonal salad, and tacos, while diners can choose sweet potato chips, potato chips or fish rice as their sides. 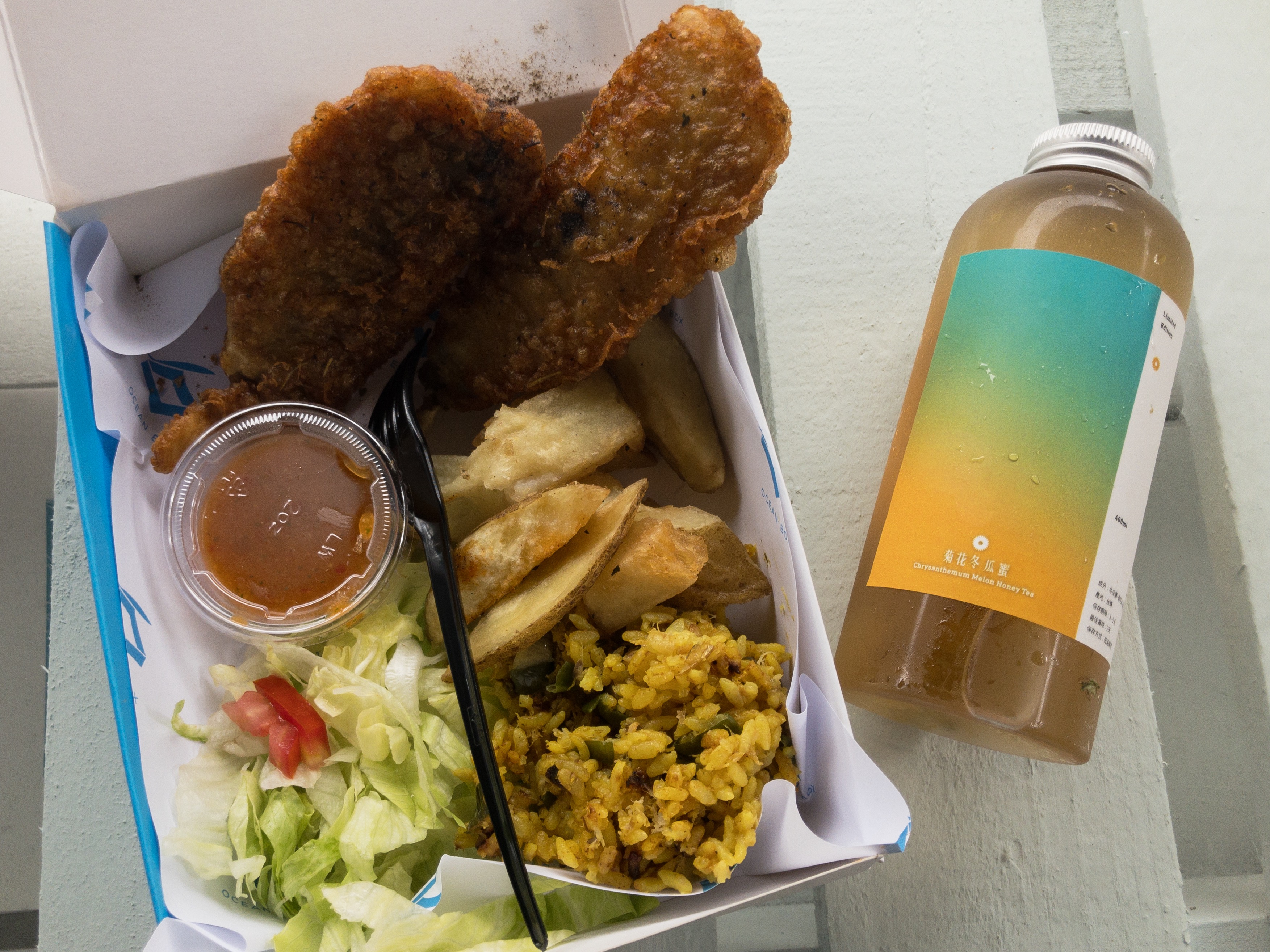 Sauces include fruity tartar, Thai chutney, and honey curry. The selections are a nod to their “experimental” style throwing typical culinary habits in Taiwan out the window where fried fish is usually served with tartar sauce. 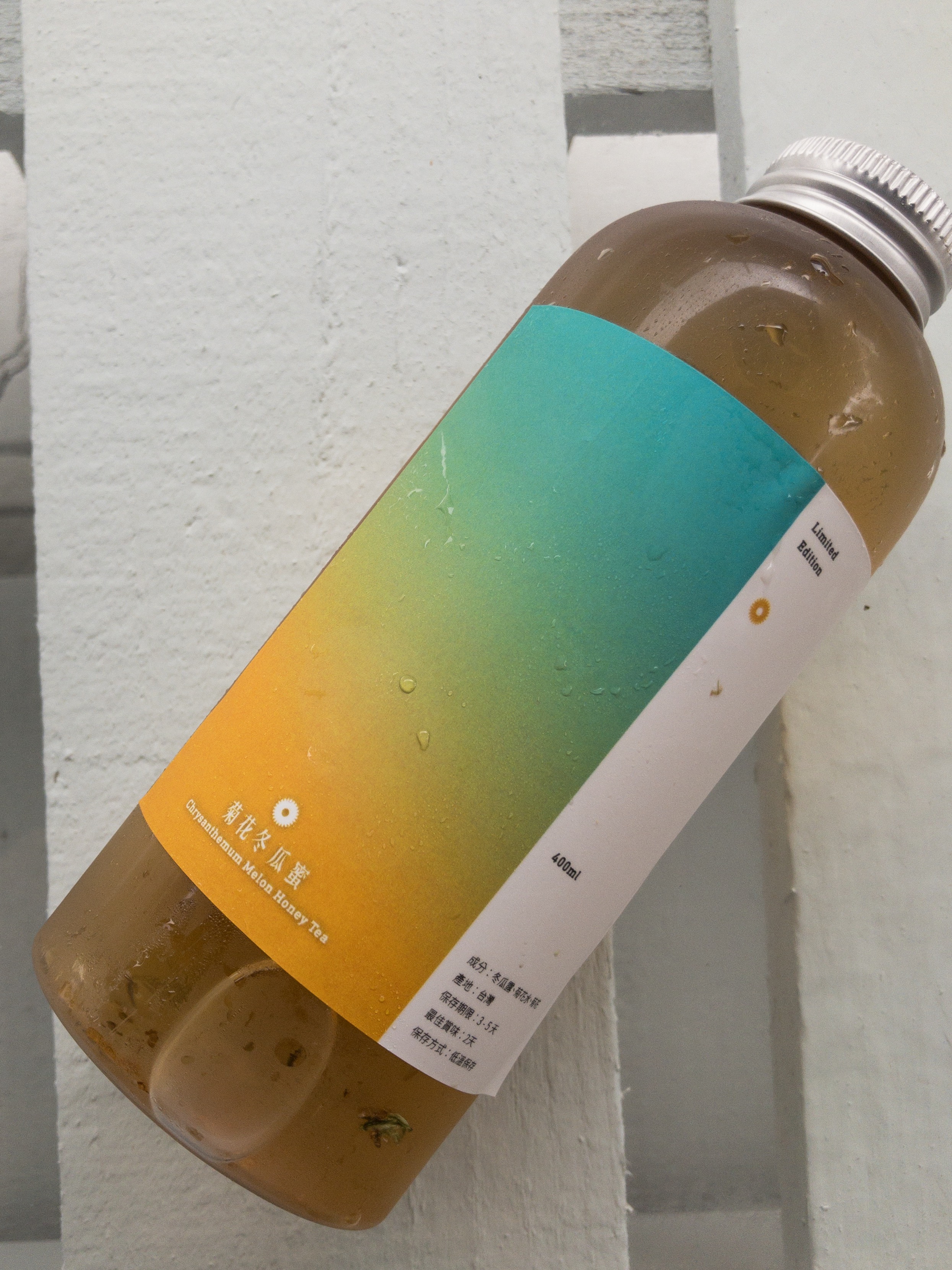 We ordered fish rice as the side and Thai chutney and their beverage,  produced in collaboration with “Don’t Yell at Me Tea Shop” (不要對我尖叫，日常茶間).

But they had run out of tacos when I was there, so they gave me potato chips instead.

The seasonal salad and fried rice are a great accent to the entree fried fish. The fried fish has a crispy exterior and soft, but firm texture inside. The flavoring isn’t your typical fried fish as they’ve mixed spices into the batter for a salty, spicy mixture. The fish rice is highly recommended— a nod to Taiwan’s braised pork over rice, but with turmeric rice and fish fillets sprinkled in each bite. 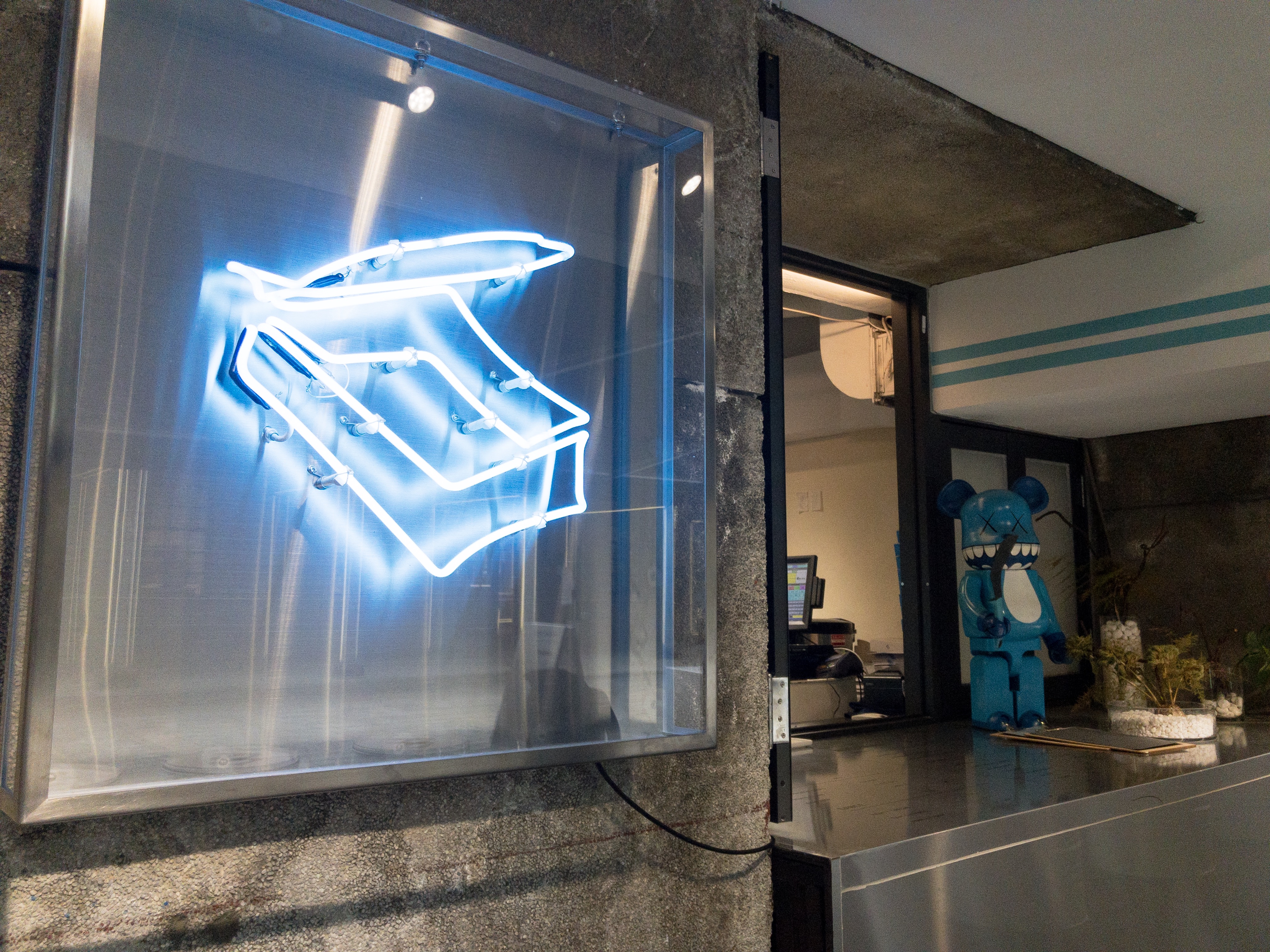 You won’t need to travel to Japan to dine at “Due Italian,” a thrice-recommended restaurant in Michelin Tokyo Guide, as it now opens on B2F of Shinkong Mitsukoshi A4 in Xinyi District, Taipei. 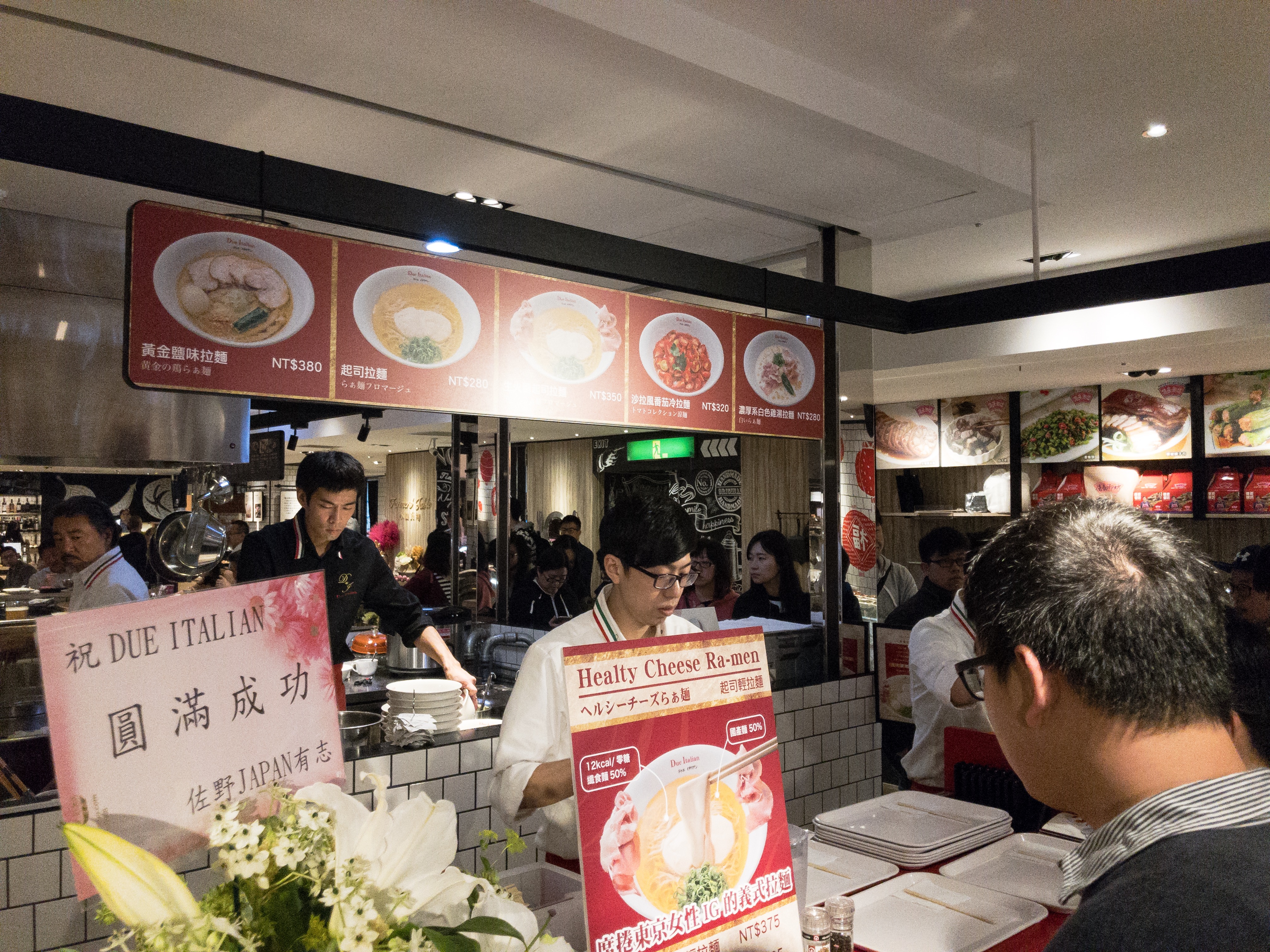 They offer five dishes of their famed Italian-Japanese fusion ramen selections, including their featured “chicken broth ramen with uncured ham fromage,” which tops the noodles with ham, a blend of cream cheese and shio, or chicken broth.

Due Italian’s ramen selections are known for its popularity with the female market, as the flavor is less salty and robust than traditional ramen. Surprisingly, when I tasted it, the cheese was not what I had expected, as the mixture of broth and cream cheese created a light, creamy flavor and thick texture that meshed well with the ramen noodles. 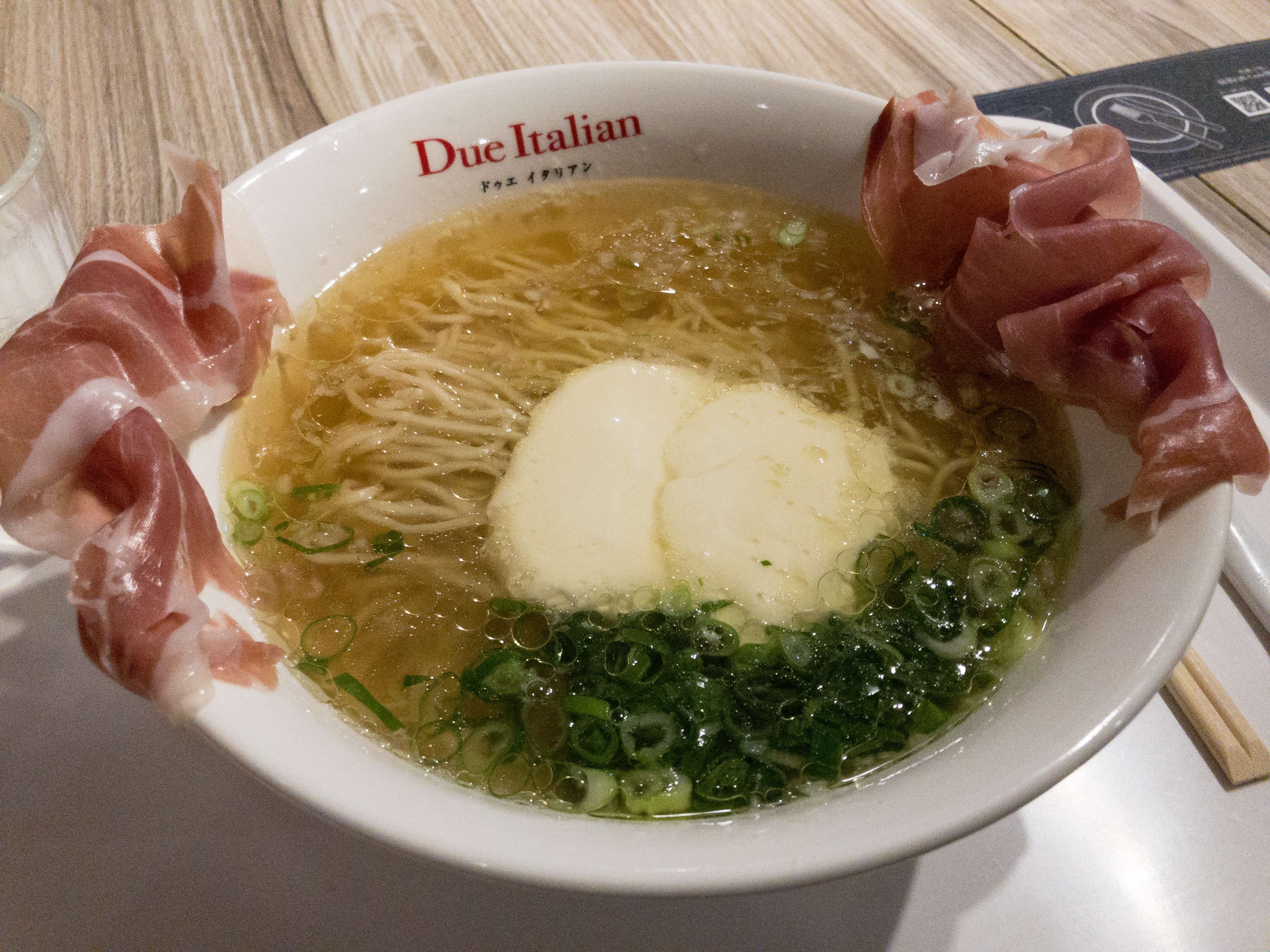 Added in the ham in between bites of the noodles and its saltiness is a refreshing zing of flavoring to the entire bowl.

There are no suggested hours to stop by the restaurant, which is located in the department store ’s food court. Even past dinner time (around 7 to 8 p.m.) there are still people lining up beside the vendor.

They take their time preparing the gourmet ramen for each customer, so be prepared to wait a bit — but the wait is worthwhile.

For a little bit of Taiwanese-styled food, Vege Creek offers not only luwei (滷味), but luwei for vegetarians.

They already have six stores in Taipei alone, and one store in Taichung. Eating at Vege Creek allows each customer to take a forest-green canvas bag and select the ingredients you want in your bowl of luwei before heading to the cashier, where after paying, they will start cooking your food with complete transparency.

The ingredients and vegetables are fresh and you can’t really tell if you’re eating vegetarian meat or not. The broth is brewed with Chinese medicinal ingredients in mind and smooth to devour in huge gulps. I’ve always made it a rule to avoid finishing off the broth when eating luwei outside, as too much salt may not be good to your health, but it’s difficult to stop slurping up the broth spoon after spoon here.

A cup of water might be able to wash the taste down, which they offer near the doorway for customers to pour on their own at the Yenzi Branch (延吉店).

They also offer a selection of toppings and sauces to add to your luwei at your fancy. I’ve found sprinkling some dried seaweed adds texture to the broth but it’s on the saltier side.