A number of philanthropists almost emptied their pockets to donate as much as they could for Sower Actions’ long-running charitable program whose goal is to make sure that all children deserve a chance to learn.

Their generous support for Sowers Action allowed the organizing committee to once again set a new record in the amount of funds raised — from last year’s HK$600,000 to this year’s HK$700,000 — indicating that more and more people have found it highly important for children to be able to receive proper education, according to Sowers Action.

Photo from Sowers Action showing its volunteer chairman Albert Ho during the Charity Golf Tournament in Hong Kong on April 20, 2018

“With the help of the Clearwater Bay Golf & Country Club, Sowers Action’s Charity Golf Tournament had in the past four years raised more than HK$1.7 million (NT$6.36 million) for the underprivileged children in developing areas,” said Sowers Action Board of Directors Volunteer Chairman Albert Ho.

“Each year, all raised funds are 100 percent donated to children in need of education and welfare,” he said.

In order to allow more children to have the opportunity to learn, Sowers Action started to promote its aiding program late last year to other countries, instead of just focusing on mainland China, given China’s economic rise.

“Myanmar is our first stop,” Ho said, adding he hopes to gather more powers from all sectors in order to raise more funds to allow more underprivileged children from all over the world to benefit from the program.

“We help them change their fates through learning, and we hope with sufficient learning, a world of great harmony can be achieved,” he noted.

Also participating in the tournament were Hong Kong’s popular TV artist Cindy Lee and singer Jason Chan Pak-yu — winner of the My Favorite Male Singer of 2017 Ultimate Song Chart Awards. Both played exceptionally well in the full round and took part in the entire event, including the dinner party.

A total of 22 teams, each with four golfers, finished the full round 18 holes in the green course on Friday, whose weather was most comfortable for golfing, according to the organizer.

The dinner was accompanied by live band performance, a fortune telling, stall game, charity and auction sales in addition to awards presentation and lucky draw. A high-spirited Dunn jammed with the OMG Band singing happily during the charity dinner.

The highlight of the day was the surprise appearance by Paula Tsui, a legendary icon of Cantopop singer, who graced the charity event to throw her support behind Sowers Action over its dedication to aiding the underprivileged children — especially its policy that all raised funds must go to the needy directly and fully, rather than through any intermediate agencies.

Tsui, who has seldom appeared in public events lately, exercised her mesmerizing deep voice to invite all those present to make the event a big success by contributing as much as possible.

Many co-sponsors and guests of honor donated a number of valuable prizes, including expensive banquet coupons, artworks, calligraphy and landscape paintings for charity sales and auctions, allowing the organizer to raise an amount more than it had expected.

As a media ally, the Eye on Taiwan donated HK$48,000 (NT$180,000) for the golden sponsorship of the tournament in line with the goal of the Eye on Taiwan’s partner – the Nancy Yu Huang Foundation, which promotes education and cultural exchanges.

Charity Golf Tournament Ambassador Patrick Dunn presents a medal to a representative of the Eye on Taiwan Media in appreciation of its offer of HK$48,000 (NT$180,000) for the golden sponsorship of the event. Eye of Taiwan is a partner of Taiwan’s Nancy Yu Huang Foundation which promotes education and journalism. 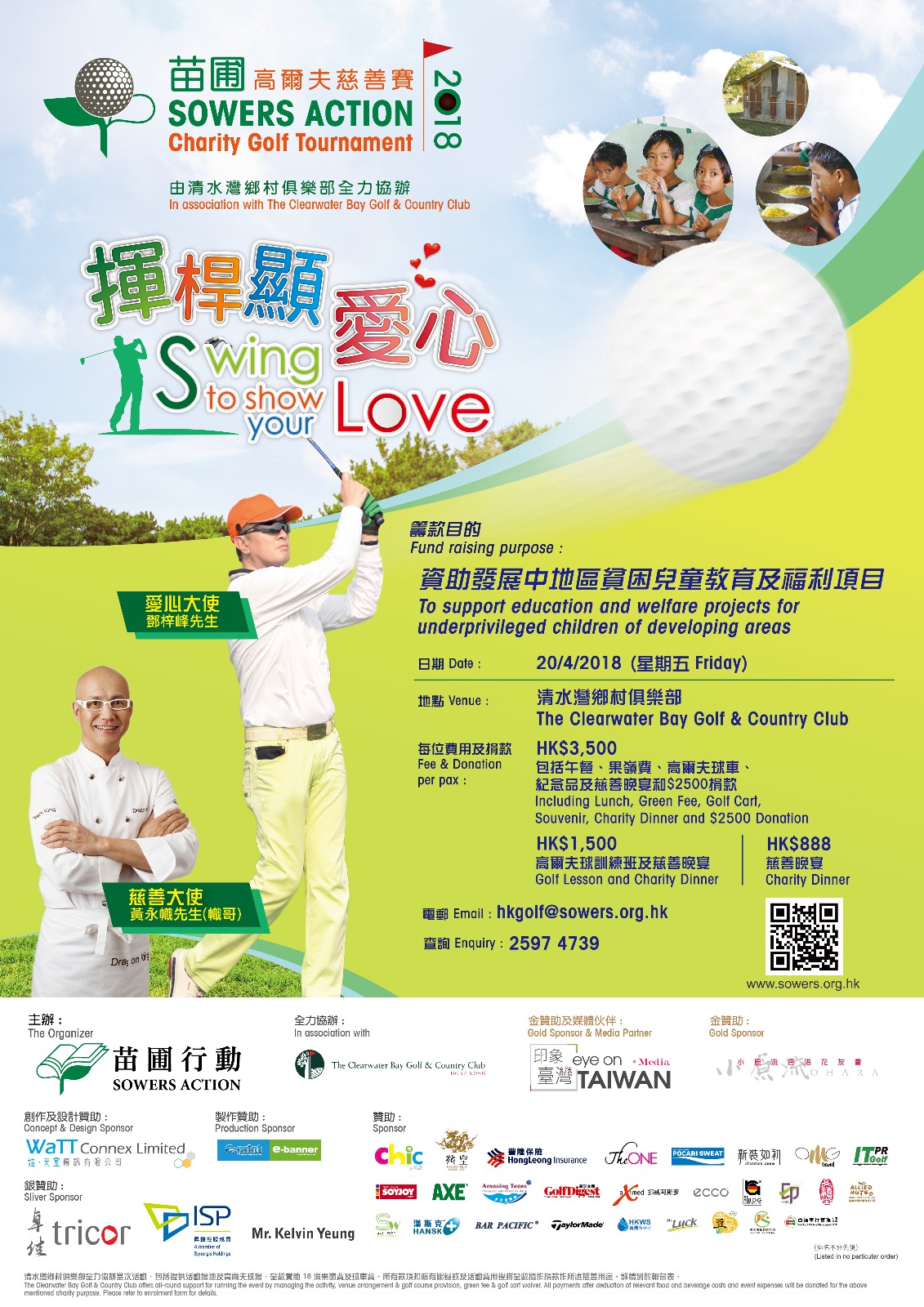