TrendForce expected major manufacturers to schedule their new product launching at the end of the year to leverage the market in 2019. As for the rest of this year, the competition between Oculus and HTC in the Chinese market would be a focus for global VR market, it said in a press release.

“Sony’s strategy this year continues to focus on console-based VR market, with the shipments estimated at 2 million units thanks to loyal users of PS4 and the Christmas sales,” said Jason Tsai, an analyst of TrendForce.

On the other hand, Oculus has not released its high-end standalone VR device–Santa Cruz, but has entered the Chinese market with Oculus Go via cooperation with Xiaomi, it noted.

For the whole year of 2018, TrendForce estimated that the shipments of Oculus will come to 900,000 units.

Regarding HTC, which has launched Vive Focus and Vive pro successively, its shipment is estimated at around 600,000 units, TrendForce said, adding the brand will only have limited growth due to competition with Xiaomi in the Chinese market.

The shipment of another VR device, Windows Mixed Reality Headset, may decline to 150,000 units while most of its partners have turned a conservative attitude towards the VR market, it said.

When Sony continues to exclusively focus on the console-based VR for the gaming market, Oculus and HTC have emerged to be major players in VR market. HTC launched new products ahead of Oculus to take the lead in the market, but Oculus Go then allowed Oculus to catch up, especially after Oculus’s cooperation with Xiaomi, it said.

The products are now branded with Xiaomi, produced by Xiaomi, and connected to the platform of Xiaomi, which has been actively assisting Oculus in increasing the shares in the Chinese market, according to TrendForce.

In addition, other Chinese branded companies may follow suit and join the camp of Oculus like Xiaomi. This would bring greater pressure to HTC, and make it easier for Oculus to go through the development of its high-end model–Santa Cruz, TrendForce noted, it said.

Tsai said he believes that Oculus would schedule the launch of Santa Cruz at the end of this year or even early next year, further pushing the company’s shipments to 1.3 million units in 2019. 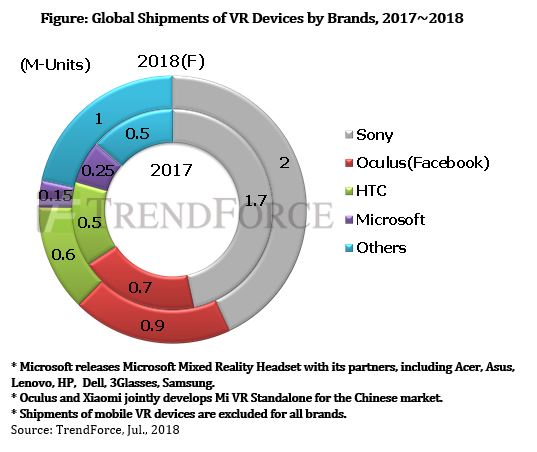