For many Taiwanese conscripts, there are memories of their military service in Kinmen, some good, some nostalgic, and well, some may be better off not reminiscing. Lieyu Township, or better known as “Lesser Kinmen” is one such place, where it takes a person, regardless of age or gender, back to the time of a strong military presence. It’s a tiny islet off the west coast of Greater Kinmen island.

By Stephanie Chao, the Eye on Taiwan staff news

For many Taiwanese conscripts, there are memories of their military service in Kinmen, some good, some nostalgic, and well, some may be better off not reminiscing.

Lieyu Township, or better known as “Lesser Kinmen” is one such place, where it takes a person, regardless of age or gender, back to the time of a strong military presence. It’s a tiny islet off the west coast of Greater Kinmen island.

It’s the home of the iconic August 23 Artillery Battle Victory Monument, which shapes like a huge missile and was erected in memory of the small islet’s perseverance under the unrelenting artillery showering by the Chinese Communist forces across the sea in 1958. It also houses Taiwan’s “first real-person shooting simulator.”

Traditionally, if one wants to try out shooting with guns or rifles, or relive some memories in the army, one would usually strap up his equipment and head outdoors. Here, at “Houlin Rifle Simulator Shooting Arena (后麟步槍模擬射擊館),” no real bullets are required.

Each participant is asked to dress up in military khakis, hoist a 1:1-ratio T91 assault rifle and pose for the camera before heading to the practice grounds, where an instructor teaches the participant how to hold the weapon.

In the main arena, the simulator is similar to the popular first-person shooting game series “Counter-Strike.” Each participant can practice shooting at 25 and 75 meters.

After the practice rounds, the participants are transported to a recreation of military battles in Kinmen. In the two groups that the Eye on Taiwan reporter attended and watched on the sidelines, the background would vary from village combat where enemy soldiers would pile out of Minnan-style houses, or on an open field where enemy soldiers would invade the islet from the shores. 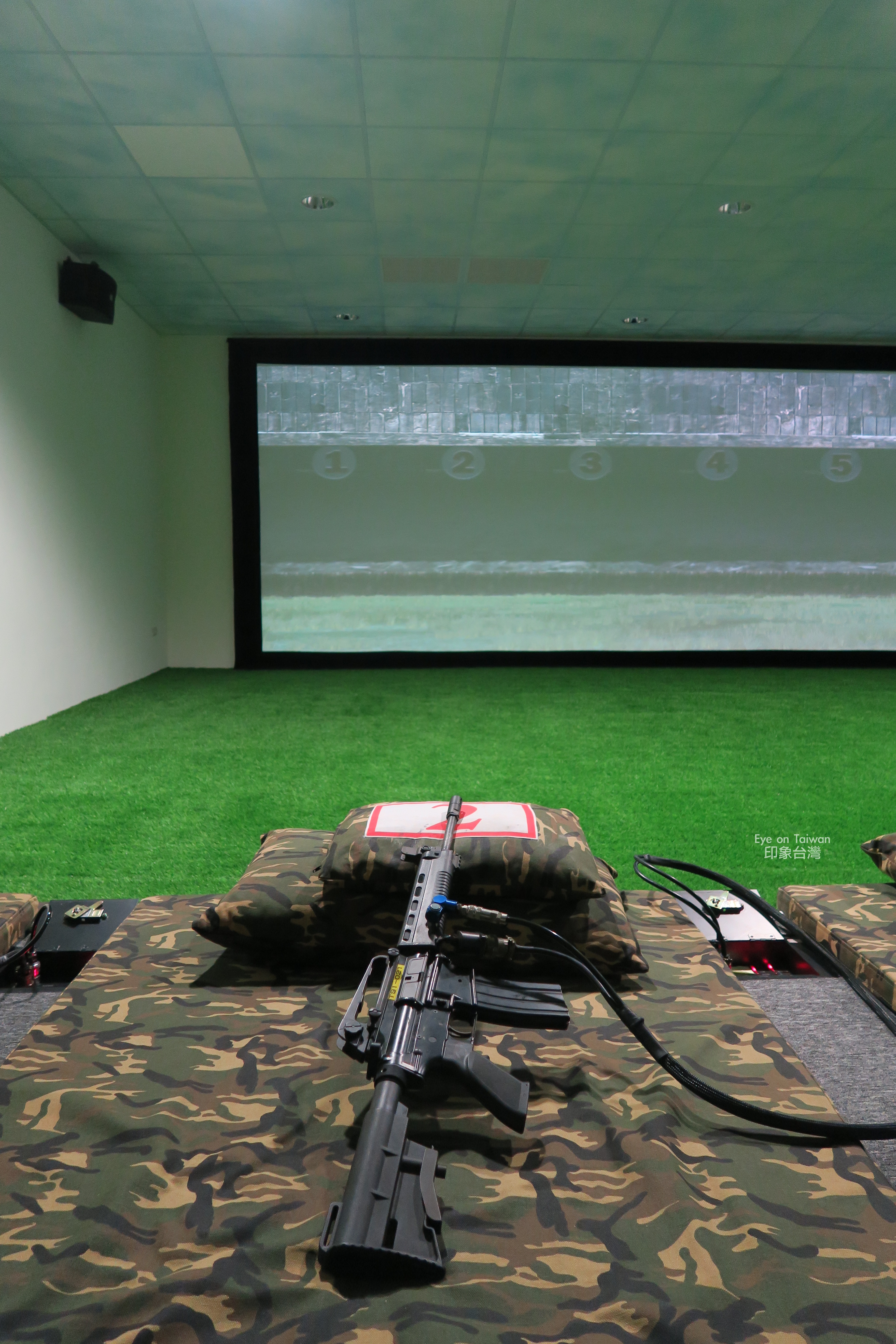 Most of the male participants in our tour group got a kick out of the simulation and shared stories of nostalgia as they shot in obviously a more comfortable and air-conditioned room.  Female counterparts mostly walked away with sore arms due to the long-time hoisting of the rifles.

At the end of the simulation, one will get a certificate with the results of his/her “sim battle.”

The shooting arena was launched by the local government in collaboration with National Chung-Shan Institute of Science and Technology, which developed the simulator technology and 12 laser-equipped T91 assault rifles. It was meant to renovate the existing military grounds. In the past, Houlin Camp used to serve as a military hospital for the soldiers stationed in Lieyu. 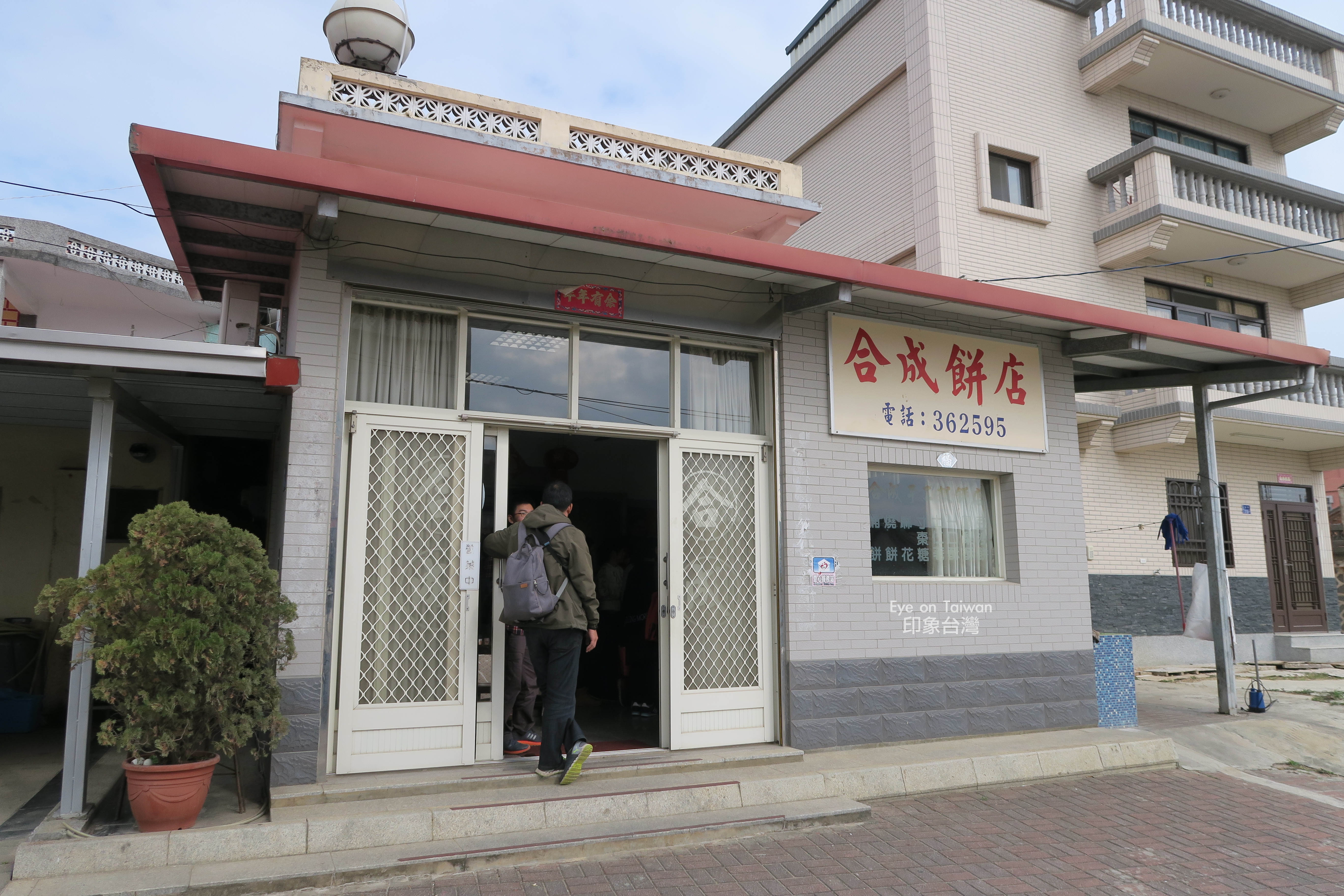 There’s a traditional bakery located in Lesser Kinmen, called “He Cheng Handmade Cake Shop” (合成手工糕餅店), boasting a 100-year-old history and the best “bucket cake” （桶餅) in all of Kinmen.

With origins from Xiamen, the cake appearance is like the traditional flaky-exterior, white sesame-sprinkled snacks that one can buy at some Chinese traditional bakeries. But at the insides, it’s a flavor that one can’t taste anywhere else, not even in Kinmen, the owner boasted. While the exterior is made of flaky dough, the fillings inside are a mixture of pig oil, which brings out a nice, somewhat salty aroma, and bulb onion, which adds a zing to the taste.

It’s incredibly satisfying to bite into. As a person who doesn’t really appreciate flaky-textured cakes, as I find it a bit greasy and sticky to the teeth after one too many bites, this was one cake that I wolfed down quickly with a splash of green tea.

Apart from bucket cakes, they also offer assortments of traditional snacks, including another favorite among the locals: deep-fried twisted rolls (麻花捲), covered with sugary glaze. It’s not too sweet, either, and days after opening a bag, the twisted rolls would still maintain its crunchy texture.

One particular tidbit that we found was how they would give out recycled paper bags to hold a customers’ treats: a point for them being environmentally-friendly!

Don’t step on the mines

When in Lieyu, one mustn’t forget to visit the fortresses: there are four currently open for public viewings. The mine-themed museum, which recalls the history of minefields and mines buried on Kinmen’s shores and land during the fierce battles between Chinese Communists and the Nationalist forces between the late1940s and 1960s, is located in “Tiehan Fortress” and “Brave Fortress.”

A tourist can walk through the dark corridors of the fortresses as how soldiers of the past had done . Our tour guide said before some of the corridors were sealed off, people who didn’t follow the signs could easily end up lost in the maze-like interior.

On the walls and inside some of the bunker rooms are history laid out before us, retelling how soldiers buried mines, then, later on, attempted to dig them up as children or the locals were getting hurt from unknowingly stepping on them.

Due to haste and lack of planning (however one may wish to interpret the military’s actions then), the locations of a lot of mines were not logged in, despite protocol dictating the soldiers to do so, thus making locating them years later a lot more troublesome and dangerous.

There is also a wall showcasing the mines used in the battles decades before, as well as a corridor for interactive immersion, where tourists walk along a sandy road, and occasionally, step or come across a hidden mine.

While the beaches are now cleared of minefields in Kinmen, the museum serves as a stark reminder of the small island’s history, as well as how actions then still could play out in the future.

Houlin Rifle Simulator Shooting Arena: Opens to the public on Jan. 28. Prices include: NT$350 for individuals, NT$100 for locals (must have ID card) and NT$250 for groups (12 people and above.)