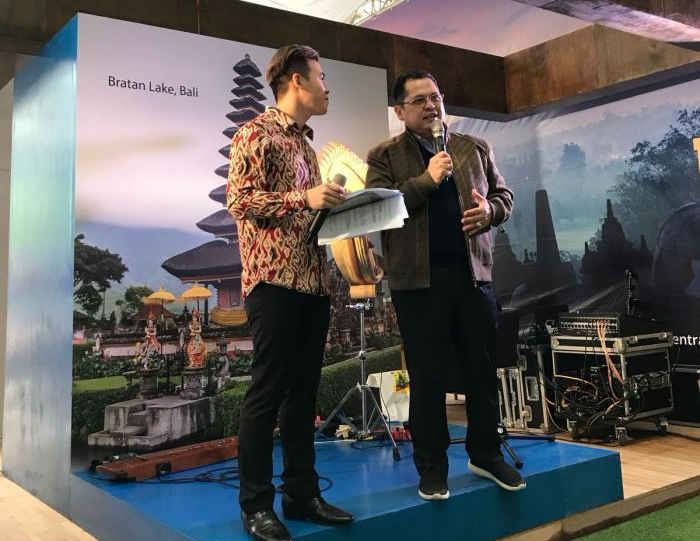 Indonesia is keen to solicit more Taiwanese tourists and relevant investments in the country as Taiwan has increasingly become a source of substantial income in the growth of Indonesian tourism.

In a bid to minimize the impact brought by the eruption of Mount Agung in Bali – the number one sightseeing destination for holidaymakers from Taiwan, tourism and relevant Indonesian authorities have stepped up efforts in promoting new tourist attractions for Taiwanese tourists.

Robert James Bintaryo, the representative of the Indonesian Economic and Trade Office to Taipei, pointed out in a business-to-consumer (B2C) travel show held at Miramar Entertainment Park in Taipei Saturday (Dec 16) that the event was meant not only to sell tourism products to Taiwanese consumers, but also allow them to understand local art and culture of Indonesia.

“The two-day event, which runs through Sunday, is the result of cooperation of IETO Taipei and Ministry of Tourism,” he said, adding activity like this will continue to be held in public places such as malls and shopping centers in Taiwan from time to time.

The Indonesian Ministry of Tourism has invited a number of Taiwanese and Indonesian tour companies to take part in the event, during which organizers also introduced commodities of Indonesian culture, ranging from coffee, spa, traditional toys to virtual reality devices.

“The facilities and infrastructure of tourism supporters in these 10 main destinations are the most ready, so they are easy to be branding in order to increase the number of foreign tourists visiting Indonesia, which we have targeted at 15 million this year and will increase to 20 million by 2019,” said Minister of Tourism Arief Yahya.

He said in order to build up “New Bali,” the Indonesian government has also boosted the development of facilities and infrastructure in the ten tourist destinations, including widening of roads, construction of toll roads, tourist homestays, submission to UNESCO to become Geopark, and the increase of airports.

Experts said the development is expected to boost infrastructure in Sumatra in the country’s west to North Maluku in the east.  For an economy that’s still heavily dependent on commodities, such as palm oil and coal, tourism is a way of broadening the government’s foreign-currency revenue sources.

Together with the Investment Cooperation Agency (BKPM), Arief has also invited Taiwan businessmen to flush tourism investments in Morata and other Indonesian islands that enter the special economic region (KEK).

“The investment in rupiah is Rp 20 T. Taiwan investors are expected to enter US$100 million or about Rp1, 3 T this year,” Arief said, adding travel from Taiwan to Morata takes only three hours by air.

Morotai is a rugged, forested island lying to the north of Halmahera. It is one of Indonesia’s northernmost islands and has an area of some 1,800 square kilometers. The island’s largest town is Daruba, on the islands south coast. Almost all of Morotai’s numerous villages are coastal settlements.