On the first day of the show, the COMPUTEX Forum featured talks centered on artificial intelligence (AI), with experts in the field sharing their insights. In his welcoming remarks, TAITRA President and CEO Walter M. S. Yeh described AI as the main driver of digital transformation, affecting business strategies and manufacturing techniques as well as creating opportunities and providing capacity to improve daily lives.

In face of the introduction of 5G wireless Internet and the Internet of Things (IoT) reaching a new peak this year, how we adapt and apply technology has become more important than ever. 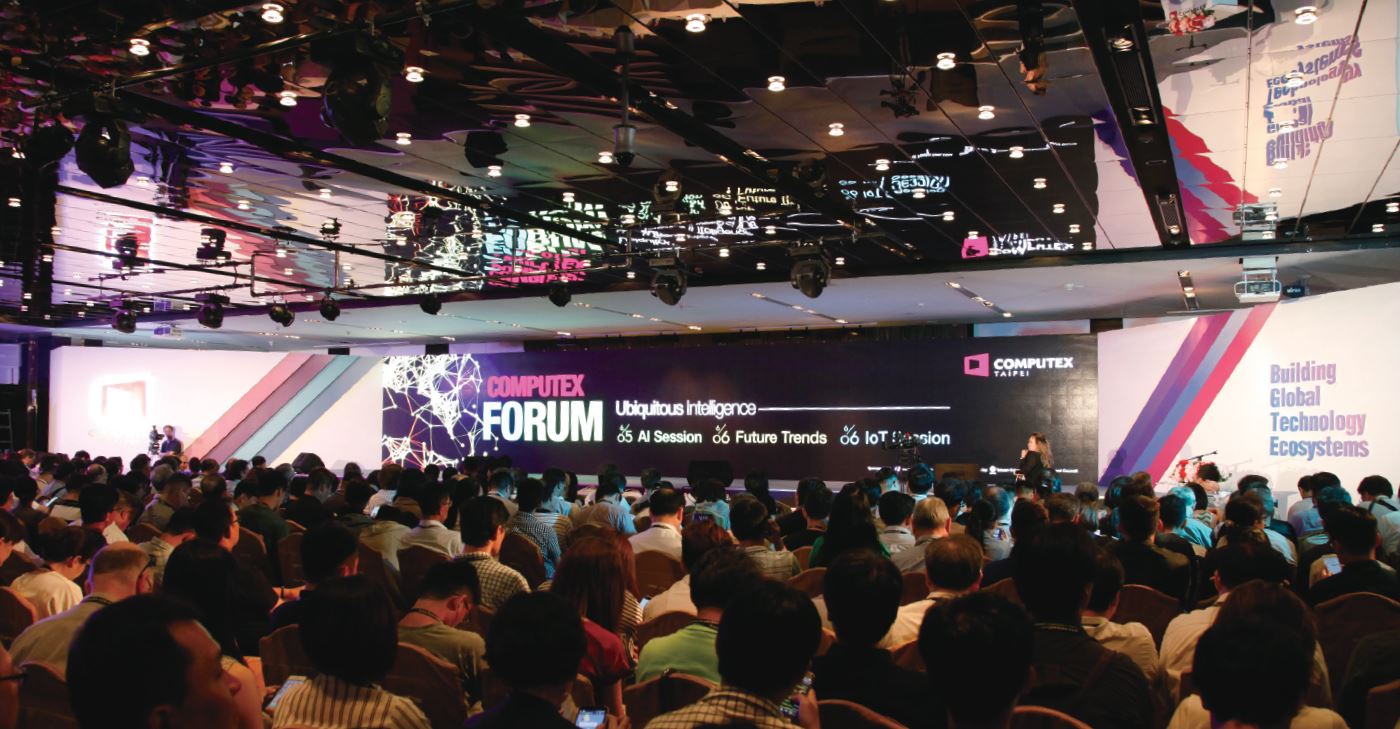 Deepu Talla, vice president and general manager of NVIDIA, provided an overview of how AI is revolutionizing the industries for automobiles, smart cities, health care and consumer IoT. “In the past, engineers used to write software, and now AI is software writing software, automating the process,” explained Talla. He delved into the influences and changes AI has brought about in each of the aforementioned industries.
Improved Health Care
Rene Haas, president of Arm, spoke about “Humanizing AI” from a social standpoint, having now arrived at a crucial moment in time where our concerns should look beyond the speed at which a webpage loads. Before, doctors could not know whether their diagnoses were accurate or if medicines from drug companies were effective. Using the example of an asthma inhaler, he showed how a simple device connected to doctors and hospitals through Wi-Fi can help monitor patients’ conditions and the effectiveness of different medications.
Haas cautioned that while technology can change our lives for the better, it does not come without risks. Thus, responsibility should be exercised and advancements be made by taking small steps.
“Our mission with Google and AI is taking this technology and trying to find a way to apply it in as many places as possible,” explained Google Product Manager Daniel Tse. His talk focused on Google’s efforts to make AI available to all and how the company’s various tools can help solve modern issues.
Scratching the surface of this notion are everyday tools such as Google Translate’s ability to process text and visual data, Gmail’s autocomplete function, and Google Photos’ quick location of images. Aside from building from technology, Google also creates platforms that allow businesses and their developers to innovate to fit various demands. Tse gave examples of how these tools and technology are implemented in the health care industry, tackling issues from preventing diabetic retinopathy to diagnosing cancer cells. “We started out with models doing what doctors can do, and now we are trying to push the envelope in conjunction with doctors to see what we can find,” he concluded.
An Industrial Perspective
on AI
Advantech CTO Dr. Allan Yang shared insights on how AI technology extends beyond merely connecting humans. He introduced an industrial perspective on how AI can leverage industrial scenarios to improve productivity in vertical segments and solve problems through deploying domain know-how.
Dr. Tau Leng, senior vice president of technology for Supermicro, talked about priority conflicts and responsibility issues by using the “Trolley Problem” concept. The Trolley Problem gives a scenario where five people are tied to the tracks with a trolley coming at full speed. Two options are possible: do nothing and let the five people get run over or pull a lever that allows the trolley to switch to a set of side tracks with one person tied to it. The problem and its variants weigh the moral responsibility of killing five versus one. Yang stressed the importance of companies and industries coming together in the face of this ethical dilemma that accompanies technological advancement.
Bridging Industry and Academia
The session’s last speaker was Dr. Winston Hsu, a professor from the Communication and Multimedia Lab at National Taiwan University. He addressed the paradigm shift in industries cause by rapid advancements in AI technology. He started out by coining AI as “Augmented Intelligence,” which is designed for productivity, safety and efficiency. He then noted how traditional economies can particularly benefit from AI technology applications through mass data. “Now is the perfect timing for joint industry and academia projects,” Hsu said, sharing his own experiences of collaborating with various industries and discovering new possibilities for applying AI as well as business opportunities.

Dr. Melik Demirel was invited by the Taiwan Textile Research Institute (TTRI) to be one of the keynote speakers at the Taipei International and Forum and Exhibition (TIFE) 2018. His topic was “Biotechnology Routes to Advanced Fibers in Textiles and Fabric Discovery in USA.”