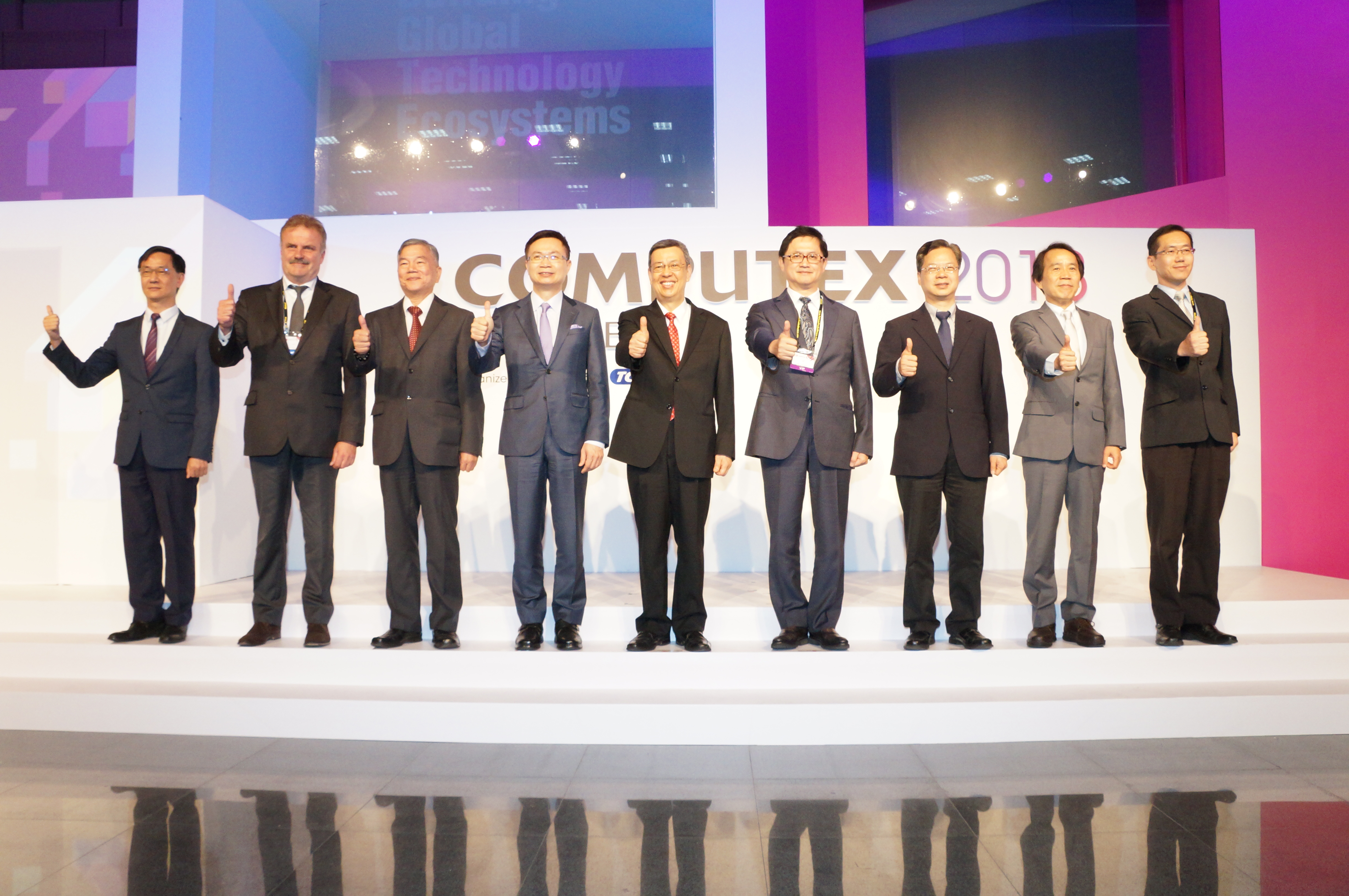 COMPUTEX TAIPEI 2018, one of the world’s largest technology trade shows, opened on Tuesday with Vice President Chen Chien-jen vowing to inject funds to ensure Taiwan’s ICT industry stays abreast of the latest tech advancements globally.
Speaking at the opening ceremony of the five-day annual event, which kicked off at the Nangang Exhibition Center in Taipei, Chen said that, over the years, COMPUTEX has firmly established its status as a top-notch global B2B high-tech and ICT trade platform that has helped to bridge transactions for leading suppliers and buyers from all over the world.
Another function of COMPUTEX is to serve as a venue for the convergence of experts from bellwether tech sectors and leading startups, providing opportunities for sharing insights through various forums held during the exhibition period, Chen said.
To fit in with the latest trend toward Artificial Intelligence (AI) development, Chen said that Taiwan’s government would pour in NT$16 billion during the next five years to set up startup research centers, develop infrastructure related to AI research and cloud services, and cultivate talents in order to boost the local ICT and semiconductor industries.
Recalling the establishment of COMPUTEX back in 1981, James C.F. Huang, chairman of the Taiwan External Trade Development Council and one of the organizers of the event, said it is “a story of transformation” that did not happen overnight.
“Over the years, COMPUTEX has grown into one of the most renowned global technology shows on the planet with the backing of the world’s top ICT manufacturing and R&D powerhouses right here in Taiwan,” Huang said.
This year, COMPUTEX gathers 1,602 hardware and software suppliers from 30 countries to build global technology ecosystems. The show focuses on six main themes: AI, Internet of Things (IoT), 5G, blockchain, innovations and startups, as well as gaming and VR.
“As you may know, the potential and the future of the AIoT [AI & IoT], 5G, and blockchain technologies are limitless, and when AIoT takes off on the wings of 5G technology, what we will see is the start of a whole new ball game,” said Huang.
T.H. Tung, chairman of the Taiwan Computer Association, another major organizer of the event, stressed the importance of COMPUTEX’s mission to assist the realization of innovative ideas by providing a platform for startups to connect with the world.
In only three years, InnoVEX at COMPUTEX has established itself as Asia’s leading innovation and startups platform, Tung said, adding that a record-breaking 388 startups from 21 countries were to take part in the three-day show that begins on Wednesday.
“We have invited more than 60 experts from home and abroad to talk about their specialty field across over 100 conferences and meetings,” Tung said, adding that 200-plus representatives of international venture capital businesses are to participate in the occasion.
Other speakers at the opening ceremony included Antti Pelotomaki – deputy director-general of the Internal Market, Industry, Entrepreneurship and SMEs Directorate-General (DG GROW) of the European Commission – and Taiwan’s Minister of Economic Affairs Shen Jong-chin.
Other major exhibits being held along with InnoVEX and COMPUTEX include iStyle, SmarTEX and Gaming & VR, with products featuring the latest in everyday technology.
Big names in the industry participating at COMPUTEX include Acer, ADATA, Akasa, Amazon, ASRock, Asus, BenQ, Clevo, CMC, Cooler Master, DEEPCOOL, Delta, Edimax, Garage+, Gigabyte, KWorld Computer, LUMENTUM, MICRONICS, NVIDIA, Supermicro, Thermaltake, the USB Implenters Forum, VIAVI, Wiwynn, and ZOTAC.
The presentation ceremony for COMPUTEX’s d&i special and golden awards as well as the Best Choice Golden and Best of the Year awards were presented by Vice President Chen during Tuesday’s opening.
Among the winners, ASUS won six Best Choice and 11 d&i awards, and its Zenbook S took home the Best Choice of the Year Award. Acer captured 4 d&i and four Best Choice awards.

Dr. Melik Demirel was invited by the Taiwan Textile Research Institute (TTRI) to be one of the keynote speakers at the Taipei International and Forum and Exhibition (TIFE) 2018. His topic was “Biotechnology Routes to Advanced Fibers in Textiles and Fabric Discovery in USA.”