As Microsoft embarked on its own transition to being a services provider, AAEON began taking on its first smart lighting projects. Lighting is a fundamental part of smart cities, with a wide range of use cases and areas that can be improved thanks to technology. 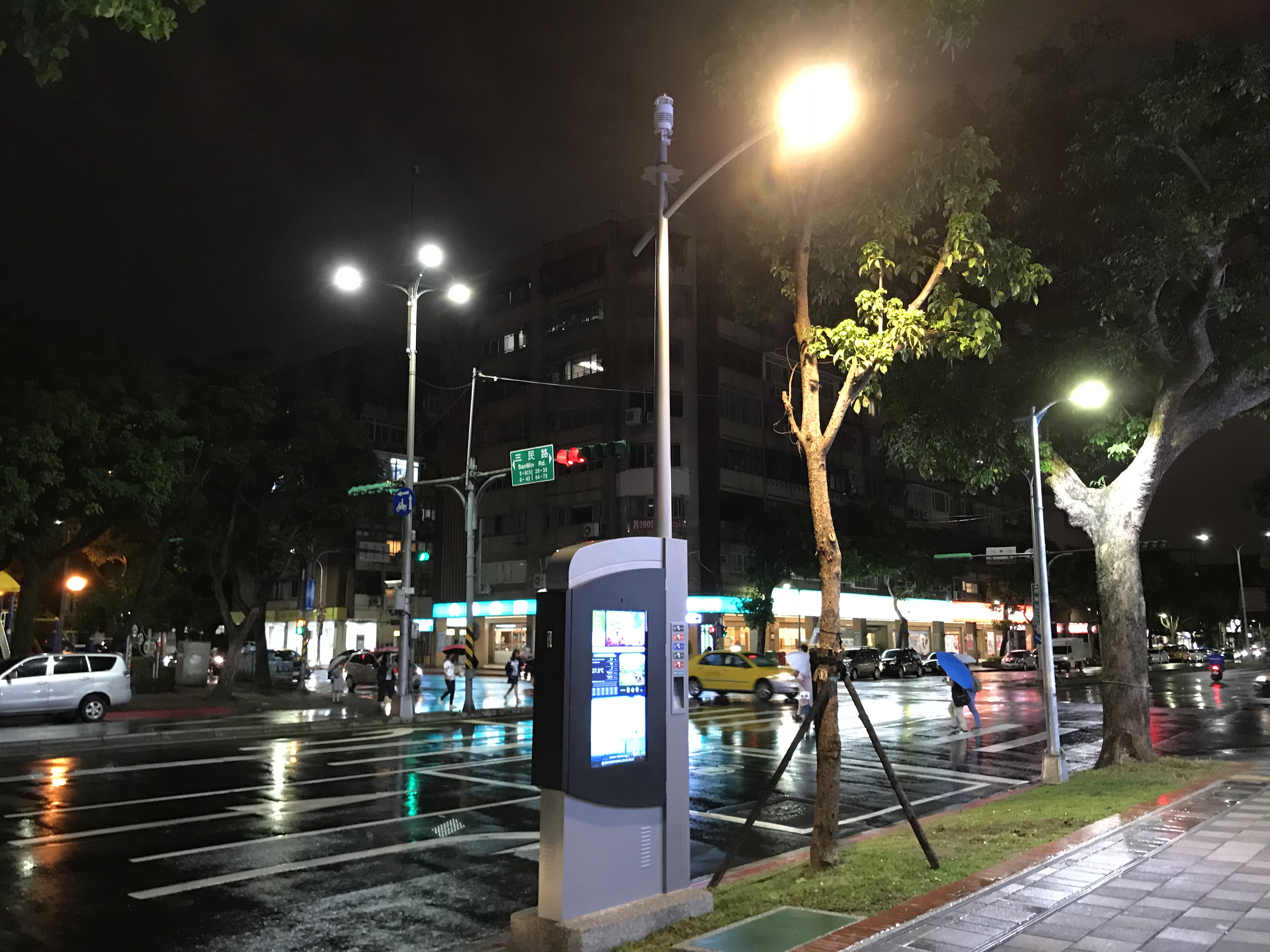 As Microsoft embarked on its own transition to being a services provider, AAEON began taking on its first smart lighting projects. Lighting is a fundamental part of smart cities, with a wide range of use cases and areas that can be improved thanks to technology. By building on Microsoft’s cloud platform and focusing on its own core competencies, AAEON designed the equipment necessary to link real-world applications with a central management system software platform.

AAEON developed these capabilities through its first project, covering 1,200 lights at National Taiwan University. From there, AAEON began working with the Taipei City Government, building the city’s smart lighting platform with more than 6,000 units, and expanding the platform to include other features, such as monitoring and weather instruments.

The Taoyuan City Government has long aimed to install smart lighting in the Qingpu area between the Taoyuan Airport MRT’s Taoyuan HSR (A18) and Taoyuan Sports Park (A19) stations.

“It is a significant milestone project for the company,” said AAEON Senior Advisor Steve Hsu, who formerly led the firm as CEO, stepping aside to give new blood a chance to forge the company’s future. “While it’s not particularly large in scale — only three to five square kilometers — the project encompasses major streets and a principal transportation hub, as well as a variety of commercial properties and sizable parks, making it an ideal demonstration site for smart technologies.”

“Construction on the project is already underway and is scheduled to be completed in the first quarter of 2020,” he said.

“The Taipei Computer Association has expressed a desire for the project to be concluded by March, in time for the 2020 Smart City Summit & Expo,” Hsu said, adding that AAEON aims to accommodate the request and be included in the trade show, as the project includes about a dozen smart city applications that could be highlighted.

Aside from smart streetlights, the project also includes Blue Pond Park, for which a number of intelligent applications have been developed. The park also features smart toilets to help monitor conditions in the public bathrooms, making the park a “living lab” just like a demonstration area.

“Essentially, anything anyone could dream of, or the Taoyuan City Government asked for, has been included in the project,” Hsu said.

Hsu, cited, as an example, another park in the area with a large pond, calling for the installation of remote monitoring equipment to gauge water levels and warn of flooding during heavy rainfall.

“The Qingpu project is designed to assess what technologies or solutions can be applied or adapted to smart city applications,” he said. 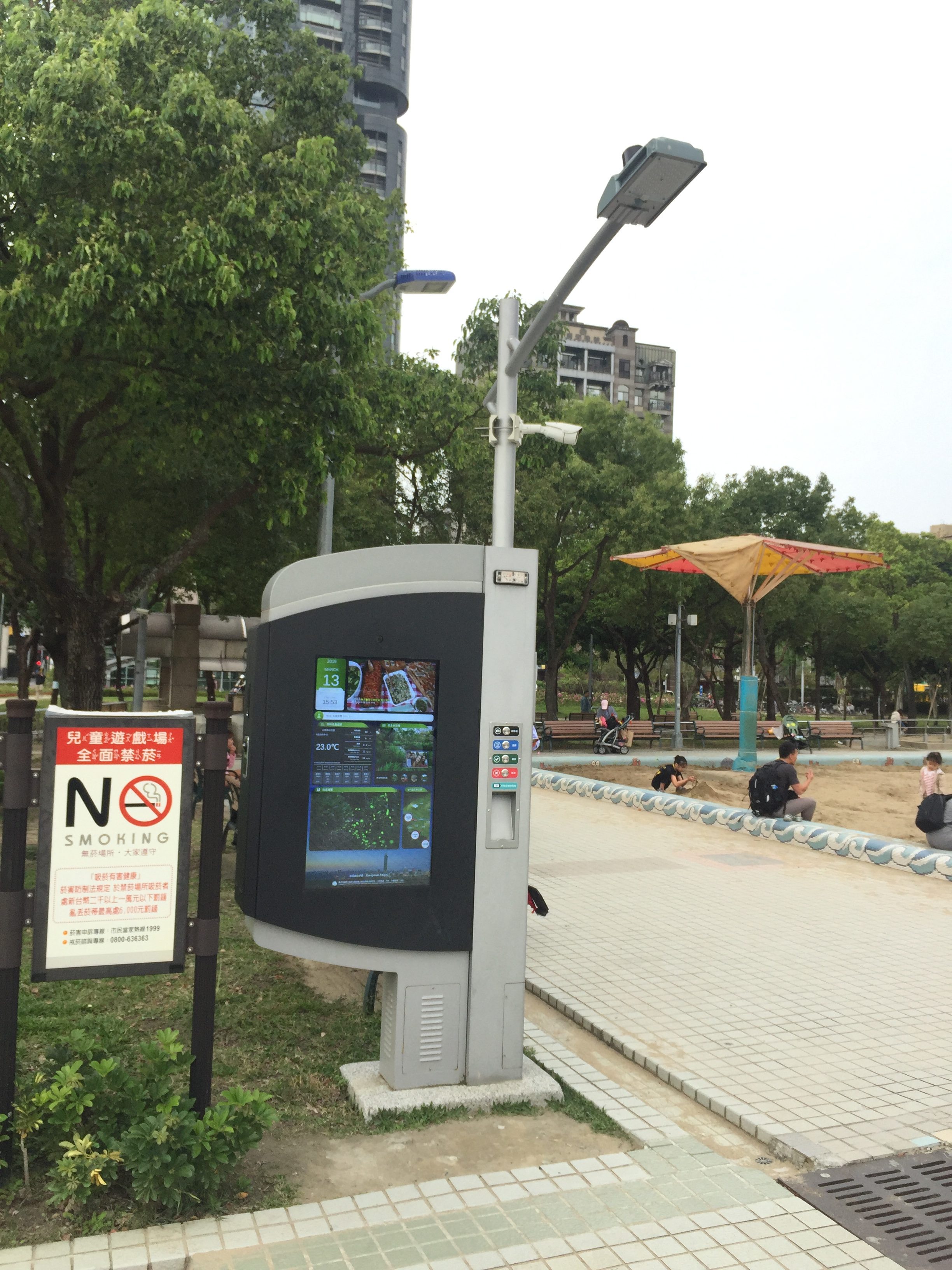 In theory, streetlights are excellent platforms for smart applications because they are, by their nature, electrified. However, in Taiwan, the main power utility only supplies electricity to streetlights for 12 hours each day.

“At 6 PM, a switch is flipped and the city lights up. At 6 AM, it gets switched off and the lights go dark,” Hsu said, adding that it’s a practice about 100 years old.

To surmount the challenge posed by a daily 12-hour blackout when deploying smart streetlights, AAEON has collaborated with one of Taiwan’s major electric scooter manufacturers. By installing waterproof battery swap stations custom-designed by the scooter maker at the base of some smart streetlights, riders are given more convenient options for changing their batteries. In return, the same batteries used to power this ubiquitous form of transportation instead provide energy for the equipment on the streetlights — truly smart infrastructure and a win-win solution for both firms.

At night, when power is being supplied to the grid, the streetlights provide energy to the swap station to charge its batteries. Due to technological limitations, even advanced batteries eventually reach a point where they do not store enough energy for use in electric scooters. However, these older batteries still retain enough capacity to power IP cameras and other instruments, so their use in the smart streetlights helps reduce waste and promote a circular economy.

Eventually, the goal for the Qingpu projects is to have a dashboard that presents all relevant information, such as battery status or overviews of intersections, in one place.

“The smart city industry is a new frontier where everyone is a pioneer, trying to feel their way around the market,” Hsu said, adding that AAEON has progressed from smart city 1.0 (light control) to 2.0 (smart light poles), and is making progress towards 3.0 (smart city as a total solution).

“The long-term objective is to modularize every component of a smart city, as very few places will need more than a dozen specific applications,” he said.

“Projects such as Qingpu provide a real-world ‘living lab’ for AAEON in which to develop, test and validate solutions, which can later be copied and applied in other places,” he added.

“Whatever the client needs, AAEON is ready to provide solutions,” Hsu said, adding that the idea is to build a system out to the requirements of the project, like picking a team for a job.

For example, smart parking systems, which are being deployed in Qingpu, solve a problem for high-traffic areas, but wouldn’t be necessary in all places. Other applications AAEON is deploying in Qingpu, such as smart streetlights and energy solutions, would be common needs almost everywhere. By proving the viability of such applications, AAEON can assemble the right components to meet the needs of every client.

Another aspect of smart cities AAEON is working on is total cost of ownership. After installation of all the component technologies is completed, operating such systems creates overhead, as well as opportunities to reduce costs. While there are inherent administrative expenses that are unavoidable, smart cities and their components provide tools to generate a return on investment; whether in monetary terms such as reduced personnel needs due to automation or eliminating redundancy, or improved services for the target populace, such as predicting equipment failures so repairs can be scheduled in advance to reduce downtime.

For example, smart lights can be dimmed during non-peak hours to save electricity, which has the knock-on effect of reducing their environmental footprint. Meanwhile, back-end management provides the greatest room for upgrades, as individual unit failures can be anticipated, allowing operators to proactively solve issues before end users are irritated to the point they comp

ain to authorities. This has the additional effect of reducing personnel requirements. As issues can be addressed when they arise, there is no longer a need for teams to patrol in search of broken streetlights.

Long-term goals include features like vehicle-to-everything communication (V2X). Commercialization of V2X will take a while, according to Hsu, as infrastructure to support such communication is needed. To that end, AAEON has developed Atlas, a rugged outdoor edge node featuring Intel’s Movidius Myriad X vision processing unit, which provides the foundation for future smart city solutions.

While places like Taiwan are fast to adopt such cutting-edge technology, regions like Southeast Asia don’t necessarily have a need for it. However, they do require more traditional technologies, such as smart lighting and traffic monitoring.

AAEON has set its sights on becoming a prime contractor for smart solutions, and is already serving as a supplier or contractor for key partners, including a major Thai conglomerate for work in Southeast Asia, and one of the world’s largest technology multinationals on a project in Dublin, Ireland.

“Picture Archiving and Communication System” is popularly used worldwide. It has successfully made all medical record images paperless and has been used by more than 3,500 medical institutions worldwide.

With the rise of global awareness in climate change, various environmental initiatives have observed a steady growth all around the world in recent years. In the area of transportation, mass commuting via public transportation and the adopting of electric vehicles have now become a norm in developed cities.