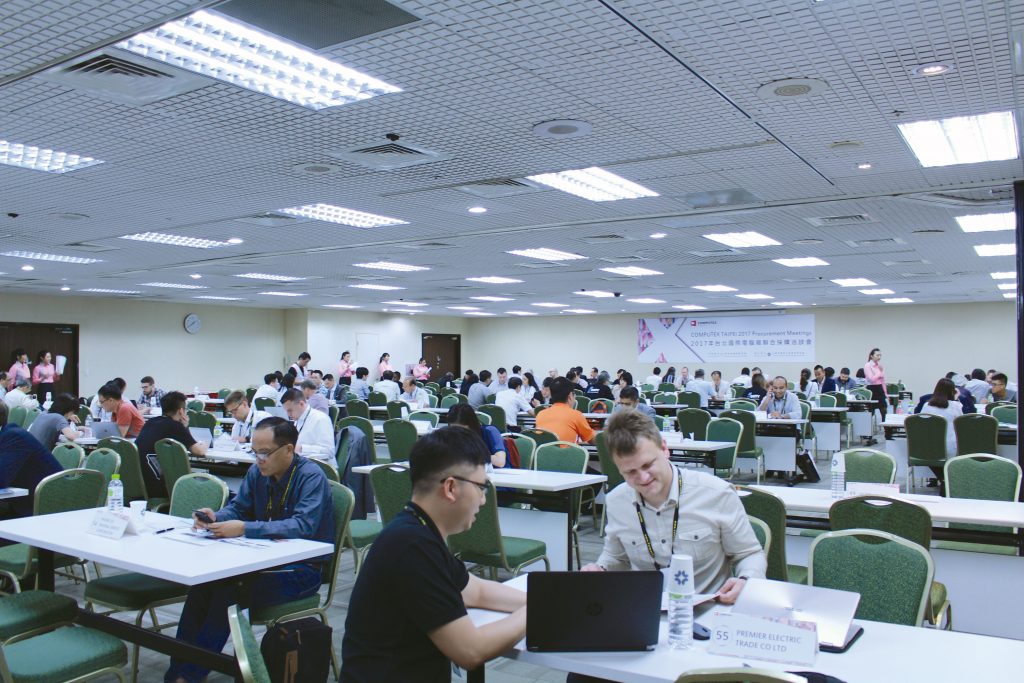 The first match-making procurement meeting at Taipei World Trade Center Exhibition Hall 1 was abuzz with activity, with a hundred scouts sitting down with foreign buyers to negotiate business collaborations. The one-on-one procurement sessions made many introductions meant to pave the way for more meetings between companies in the future.
Staples Canada Director of Merchandising Mark Shanahan and Senior Category Manager Scott Churchward were at COMPUTEX on a hunt for out-of-the-box solutions and new technology, specifically in virtual reality and augmented reality.
Staples Canada Inc. is a top-tier reseller of consumer electronics and technology, ranging from tablets, computers, mobile phones and gaming peripherals. Shanahan said they’re looking for exciting products that are suitable for Canadian consumers in the fourth quarter, Christmas and the year on.
“Right now, we’re focused on computer gaming products, educational technology products, VR, AR and mixed reality products, such as headsets,” Shanahan said.
For him, the procurement meetings allow productive exchanges and even the occasional unexpected discovery. He said that during one meeting, they learned of a fingerprint reader that could offer a promising security solution for their business customers in Canada. The product had originally not been on the table for discussion, he said.
Churchward said COMPUTEX was an attractive show because it offered innovations that were not yet available in the North American market, “things that won’t show up until six months later and that we wouldn’t have known of if we hadn’t come here.”
Andrew Smith, assistant CEO at the U.K.-based Diamond Media Group, is a long-time visitor to COMPUTEX with a decade of professional experience under his belt. He has set his sights on companies that can provide credit and quality products ranging from 3-D printer accessories such as filaments, IoT devices and power banks for mobile phones.
Smith said Taiwan was an appealing supplier because of its ability to supply products with labels in English and other packaging features suited for the European market.
He said that were some procurement meetings formatted to be “a bit like speed-dating,” and they can quickly match the needs on both sides of the table and lead to stronger relationships with local suppliers.India’s electronics provider Infiniti Retail Ltd. is at COMPUTEX for gaming hardware, ranging from PC, XBOX and PS4.
“Gaming is a growing segment and market in India,” said Ankush Sikder, assistant category manager of telecommunication.
The firm plans to open a gaming section at Cromā, a subsidiary retail company, and it sees the procurement sessions as the first step to getting acquainted with prospective collaborators in Taiwan, which offers higher quality and newer designs compared to others in the market.
For Infiniti Retail and others in the Indian market, one of the main draws of COMPUTEX are its innovative products, which are typically one step ahead of the general market, Sikder said.
Robbie Maloney, sourcing team manager at France-based Innelec Multimedia-Konix, was looking for new distributors and partners at COMPUTEX and the procurement meetings, seeking to potentially visit local factories in sectors like gaming.
Maloney said Taiwan had a stronger expertise in and understanding of the gaming industry and products than did mainland China. He said he recently visited an expo in Hong Kong, and it appeared that Taiwanese suppliers had higher quality gaming products and a stronger knowledge of the industry.
Russian buyers are interested in Taiwan’s gaming industry as well. Dmitriy Pivovarov, head of business development at Technosila, said COMPUTEX was an opportunity to bring back cutting-edge and innovative products back to Russia. Taiwanese suppliers appeared to have an edge in providing gaming consumer technology, a lucrative market back in Russia, he said.